I can’t do much if you vote NUP, Museveni tells Kayunga voters 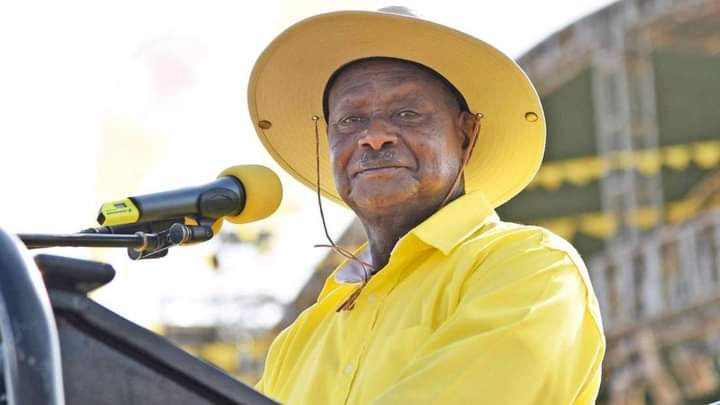 The NRM party chairman Gen. Yoweri Kaguta Museveni Tibuhaburwa has appealed to the people of Kayunga to consider voting against the opposition National Unity Platform party if they want his government to splash them with services.

While addressing a crowd of NRM supporters ferried to the rally venue in yellow mini buses and police vehicles, Museveni who campigned for Kayunga NRM candidate Andrew Muwonge made it clear that he finds it next to impossible to work with opposition politicians especially those in the NUP party.

“I can’t do much when the LCV is not NRM. How will I know the roads that need to be built? That needs to be brought to my attention by NRM MPs and LCV,” an angry Museveni roared. “If you see that NUP or DP will cure your problems, support them. I ask you to support NRM because it is the party that has diagnosed people’s problems and put in place medicines. It is the NRM that has the last word on issues,” he added.

An angry Museveni also decried the lies peddled by his mobilizers who deceieved him that he would fetch victory in Kayunga only to be massively trounced by NUP president Kyagulanyi Ssentamu Robert in the January polls.

“Everybody is saying that everybody in Kayunga is NRM, and yet in the last elections, we got few votes. Even the President got 35%. Who are those voting against the President? That means there is some confusion amongst yourselves, and you are not clear about what will help you,” he said. “All these confusions are because people have not understood properly. Politics is how you can solve the needs of the people.This is where the NRM differed from other groups. For us, we said politics of identity is not what we want. We are based on the politics of needs,” he emphasized.