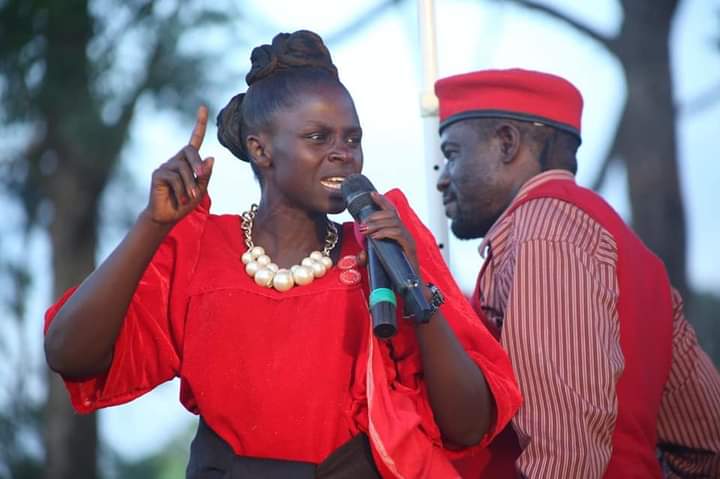 A day that started as a normal campaign day in Kayunga district ended with NUP MPs and leaders in hospital after security forces unleashed their crew to wallop every member suspected to be part of the red camp. The NUP candidate for the LCV seat Harriet Nakwedde is among those nursing wounds after tasting the wrath of security forces.

NUP Supporters also spent the greater part of the day in running battles with police protesting the brutality unleashed on their leaders and also contesting the house detention imposed on their party leader Kyagulanyi Ssentamu Robert who was supposed to appear and boost the camp of Harriet Nakwedde ahead of the polling day.

In a press interview with one of the Television stations, Ms. Nakwedde decried the regime excess force cast at her and her supporters.

“Several of my colleagues were beaten, arrested, and our machines confiscated by the police. We were granted permission to have our rally in Kayunga Town Council. Last-minute, it was halted because the President was coming,” she recounts. “Heading to the venue, we were intercepted by the police, Hon. Zaake was badly beaten. Teargas ruled the better part of the day. We condemn this,” she adds.

Nakwedde wonders how Gen. Museveni has comfortably postured as the alpha and omega whose presence cannot pave space for those with dissenting opinions.

“The reason for all the violence was because the President was going to be in Kayunga Town Council. The president was not at the Town Council hall. I think the reason is that they have lied to him that the by-election is in their favour. They didn’t want him to see our huge crowds,” she notes. “If there was a deadly bomb in Kampala, all the NRM big wigs would have survived because all of them have been in Kayunga distributing money,” Nakweede adds.

She also roasted the NRM government for wasting too much money bribing voters yet that very cash can be used to set up infrastructure like hospitals.

“The money used for the President to come to Kayunga should have been donated to the health centers in Kayunga. We would not have maternal death for at least a month,” Nakwedde retorts. “I thank Kayunga people for the support and the funding. It is sad our President Kyagulanyi was unable to come. People Power is not only in Magere. There is also People Power in Kayunga,” she adds.