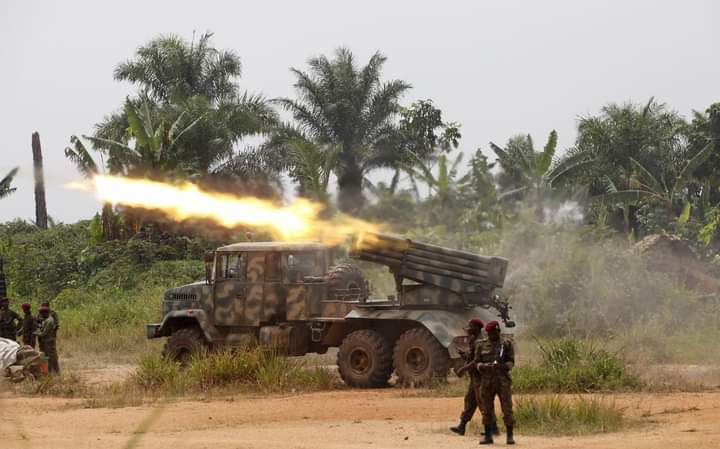 The UPDF/NRA and the Congolese army have once again launched air and artillery strikes against three more ADF camps in the thick DRC forests, the Ugandan army has confirmed.

“Today the Joint forces advanced to “contact” at Kambi Ya Yua. Three additional enemy positions were targeted by air and artillery strikes. The ground forces are also engaging the enemy in the same area,” UPDF spokesperson, Brig Flavia Byekwaso said in a tweet.

When the UPDF and FADRC launched air and artillery offensives against the ADF camps last month, it was reported that the rebel fighters dispersed but according to security sources, the latest strikes came after intelligence information indicated that the rebels had started to regroup.

On Sunday evening, there were yet another series of artillery and air strikes against the groups that had started to regroup at Kambi Ya Yua in North Kivu.

However, it is not yet how many of the enemy fighters were killed by the strikes.

The UPDF Commander of the Land Forces, Lt Gen Muhoozi Kainerugaba recently warned that the only way out for ADF fighters it to surrender or else they will be destroyed by the joint forces of Uganda and DRC.

“The joint forces will receive you and give you a second chance. You have seen what we (the joint UPDF/FARDC forces) are capable of. Operation Shujaa will continue until your terrorism ends. Many of your ‘leaders’ have already fled the bush and abandoned you to your fate. Surrender now before it’s too late,”Gen Muhoozi Kainerugaba said.

On November 30, the UPDF and FADRC, the Congolese army launched air and artillery attacks against four ADF camps in Kambi Ya Yua, Tondoli, Belu 1 and Belu 2 in the eastern part of DR Congo in an operation code named Shujaa, a Kiswahili word for “brave”.

The joint forces recently announced that 34 ADF fighters had been captured following the attacks.

The ADF was formed out of remnants of the National Army for the Liberation of Uganda (NALU) and Jamilu Mukulu was the group’s founding leader until a few years ago when he was captured by the Tanzanian forces and repatriated back to Uganda where he is currently facing charges related to terrorism.

They operate in North Kivu which borders other provinces including Ituri to the north and South Kivu to the South and has been a battle ground for a number of rival armed ethnic groups since 1998.

The province consists of three cities including; Goma, Butembo and Beni as well as six territories—Beni, Lubero, Masisi, Rutshuru.