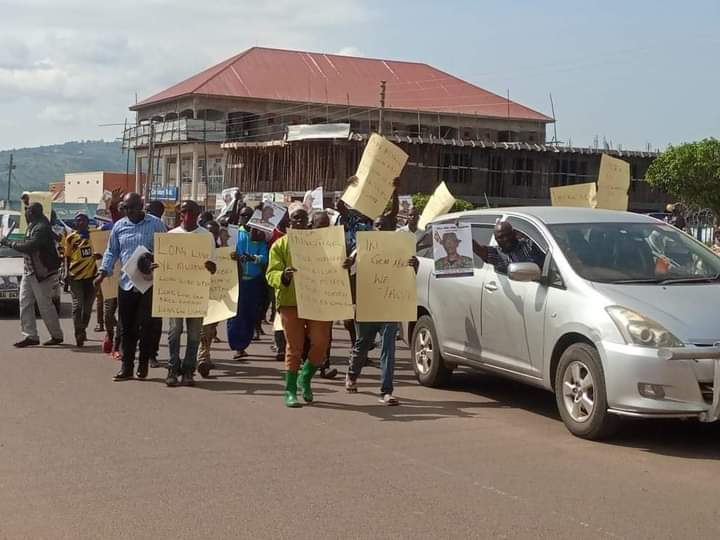 With the ravaging impact of the US sanctions eating up the CMI terror machine Maj. Gen. Abel Kandiho, the restless regime agent has taken the fight to his ancestral home in Isingiro district in Western Uganda.

His relatives enjoying police immunity have stormed the streets of Isingiro town carrying placards condemning the US government for imposing sanctions on their bread winner.

The protest comes a day after the US ambassador H.E Natalie Brown clearly stressed that Washington was unrepentant and unwilling to revise and retract the sanctions pressed on the army chief over his heinous actions during the 2021 general election.

Meanwhile when medical doctors tried to protest yesterday, police swung into action and mercilessly packed them onto a patrol and detained them in filthy cells. NUP leader Kyagulanyi Ssentamu has assessed the two scenarios of Isingiro where Kandiho’s relatives are protesting with no police interruption, and doctors’ scenario where they were brutally arrested.

SEE ALSO: Medical interns arrested near state house as they marched to parliament

“In the first two pictures – a few relatives and friends of Maj. Gen. Abel Kandiho, the sanctioned human rights abuser protesting against his sanctions under police and military protection. The second set of pictures, medical doctors arrested and detained for attempting to protest against poor welfare! It is time to resist the military regime,” wrote Bobi on his social media handle.