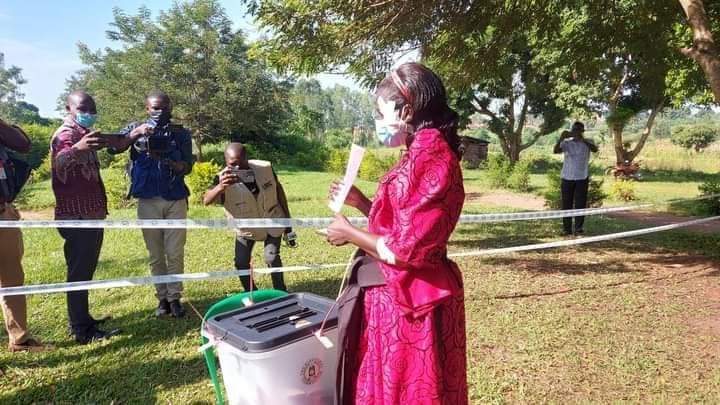 Reports jetting in indicate that the National Unity Platform party candidate for the Kayunga LCV polls Harriet Nakwedde Kafeero is in a comfortable lead. Tallying has been finalized at the Kayunga district headquarters but the EC Returning Officer has feared to declare the winner.

According to the provisional results from 18 polling stations read by the returning officer, NUP’s Nakwedde is leading by 71.7% while NRM’s Andrew Muwonge stands at 28% and others at 0.3%

NUP president Kyagulanyi Ssentamu has already decried the electoral malpracrice unleashed by the NRM in connivance with the EC. “Our agents are reporting massive fraud at the Tally Centre. From our independent tally of 335 out of 338 duly signed original DR Forms, we are leading with a difference of 15,000 votes. Now, they are adding their candidate hundreds of votes at several polling stations! Some of our agents who have tried to protest have been pushed out of the Tally Centre. Even then, we are leading by far. Be woke!,” Bobi posted 3 hours back.

But NUP is confident that they have won the polls already. “The final results from all polling stations in the Kayunga LC5 by-elections as tallied by our polling agents. Our candidate, Nakwedde Harriet Kafeero has won with 35212 votes. Salutations to our tallying team led by comrade Najja Nasif for the commendable job they did in tallying the results in time,” says NUP in a publication.