Bobi: Museveni is a shameless coward 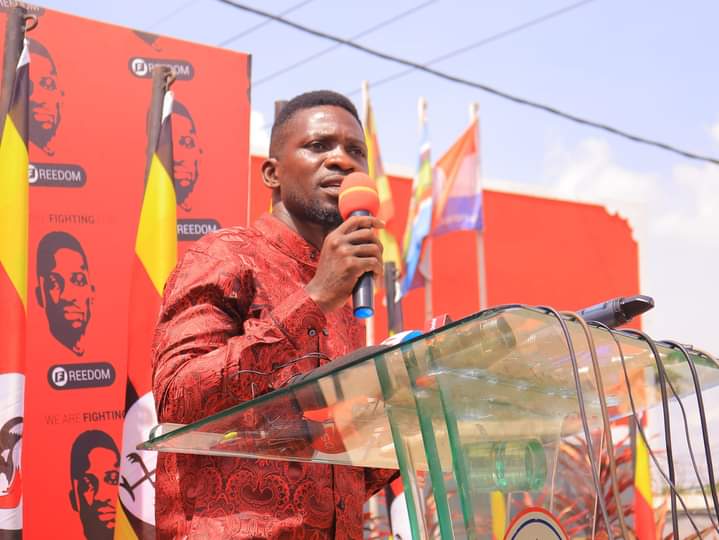 The National Unity Platform party president Kyagulanyi Ssentamu Robert aka Bobi says Gen. Museveni is at the ‘lowest of his morality’ and that he ‘stopped using some sense’ while presiding over issues. The NUP leader made the critical remarks on Monday during a presser at the head offices in Kamwokya yesterday.

“Museveni is not president, if he is, what am I?,” Kyagulanyi asked. “Museveni is a rebel, nothing less. He is defined by three things; lying, stealing, killing. He can’t behave like a statesman. He is preparing for his leave,” he added.

Bobi says he and many NUP members didn’t have any confidence in the EC headed by Byabakama.

“We didn’t expect him to announce us in January. You saw how Byabakama behaved right from the nomination time. We didn’t expect Byabakama to declare us but we went ahead to participate. We went in these polls to expose the regime to the eyes of Ugandans. Museveni didn’t give us any chance to expose him but he exposed himself. What kind of general is he if he cannot compete?,” Bobi wondered. “We beat Museveni hands down even when he deployed billions. I challenge him to a free and fair election in his own district. We are not here just crying fowl, we are here to reassert ourselves. He’s trying as much as possible to discourage us from elections but we shall continue to participate,” Bobi vowed.

Bobi says Museveni has special interests in Kayunga district and that it explains why he blocked the Kabaka in 2009.

“The leaders know how rich this area is. Museveni wants to take over all resources under whatever circumstances. The place has natural resources like gold and minerals,” Bobi said.

On confidence in Court

Bobi says the petition is a chance to yet again an opportunity to expose the judiciary.

“In January Owiny Dollo behaved in the most ridiculous manner. We have the forms. We are not crying to you for justice, but we are tasking you to do a favour to yourself to clean your legacy and credibility,” he remarked.

We are non violent, Bobi insists

“Museveni wants us to be violent so he takes a chance to kill people. While we are non violent, time has come when we can’t hold back. We will not stop Ugandans to rise. Those who make peaceful change impossible, invoke a violent struggle,” he said.

Why NUP insisits on elections

“Elections are eye openers, they are a spark. We won’t relent from elections,” he remarked. “Through elections, the world will know that you (Museveni) are the violent liar but we are the peaceful statesmen,” he said.

“Blaming me for being arrested in home. We see you by your actions, not by your words. The dictator will use you with or without your knowledge. It doesn’t make sense at all for the world to see you fighting against people with whom you are fighting in the same direction,” he remarked. “Celebrating persecution of a ‘comrade’ is itself shameless,” he said.

“Don’t wait for me to tell you what to do. I am an ordinary citizen like you. Organize, mobilize and rise,” he advised.

“Elites are a misfortune to this country. They’re people who exchanged brains and stomachs for positions,” he said. “We are non violent but we have no power on the violent ones. There will be a time when Ugandans will not be able to listen to any voice of reason. We are ‘team exposing’,” he concluded.