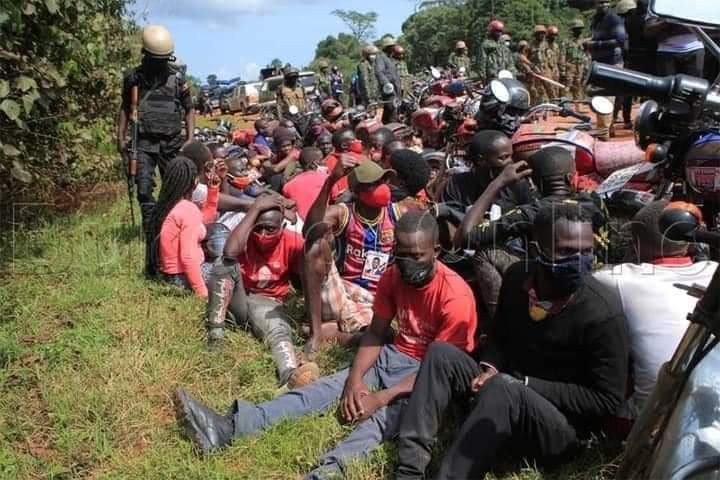 On this day a year ago, the campaign team for the National Unity Platform party presidential candidate Kyagulanyi Ssentamu Robert aka Bobi Wine was placed under siege by the military and police in an operation government did not clearly explain to the public.

SEE ALSO: We are going back to Kalangala-Bobi Wine

Bobi Wine as per the Electoral Commission calendar was supposed to campaign in the water engulfed island district of Kalangala. Soon as he laid foot in the district, the military swung to action and violently arrested all his campaign aides and supporters who were to attend the rally. Prominent Bobi aides like his personal bodyguard Edward Ssebuufu alias Eddie Mutwe, his singing partner Buken Ali aka Nubian Li, music producer Daniel Oyerwot aka Dan Magic and several were arrested, handcuffed and bundled onto a police truck. They were beaten inside the truck, pepper sprayed and asked to denounce Bobi.

Soon as his crew had been sieged, Bobi was placed in a military chopper and flown back to Kampala and then driven to his residence in Magere, Wakiso district where he was placed under house arrest without charge. All these events had been preceded by a violent campaign experience in Masaka where Ghetto TV journalist Ashraf Kasirye was shot by Masaka RPC Abaine Enock. That same noon of December 28 would see Frank Ssenteza brutally murdered by a military truck which knocked him dead in Busega, a Kampala suburb.

The violence meted out on Bobi’s crew was meant to isolate and neutralize him as Gen. Museveni sought to trim his influence on the change desperate population. His aides would later be tortured in detention and remanded to Kitalya prison by the court martial which kept them in custody for over 10 months.