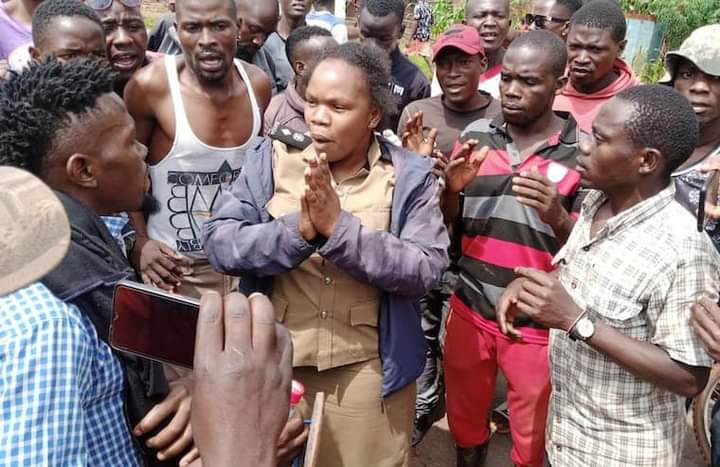 The incident happened a few minutes to midnight at Mbalala trading centre as Nantambala and a group of other revellers ushered in the new year, 2022. Police had previously warned that they would arrest all 7 pm curfew violators.

The residents stormed the police station carrying placards demanding the immediate resignation of Asiimwe as well as the release of the arrested suspects.

Mukono division police commander (DPC) Annabella Nyinamahoro was quick to arrive at the station and wisely stopped the firing of tear gas at the protesting residents.

Afande Nyinamahoro addressed residents and appealed to them to stay calm, saying the OC was already arrested and detained at Mukono Division to help with the investigations.

However, residents continued shouting and demanding the release of the bar attendants and revellers under detention.

The DPC bowed to pressure and immediately released four women and also immediately ordered for the replacement of Asiimwe with the new OC identified as Olivia Nabikko who has been shifted from Mukono Division.

Residents headed by boda boda riders later made a big procession from Mbalala trading centre to Mukono town celebrating the detention of the OC.

Sarah Namukasa, a resident at Mbalala, says the Asiimwe has been oppressing poor residents and owners of small bars.

An eyewitness Charles Muwonge said that the OC arrived last night on the patrol truck shooting at residents who had started a countdown into the new year. Meanwhile, the body of the deceased is still at Kawolo hospital mortuary.