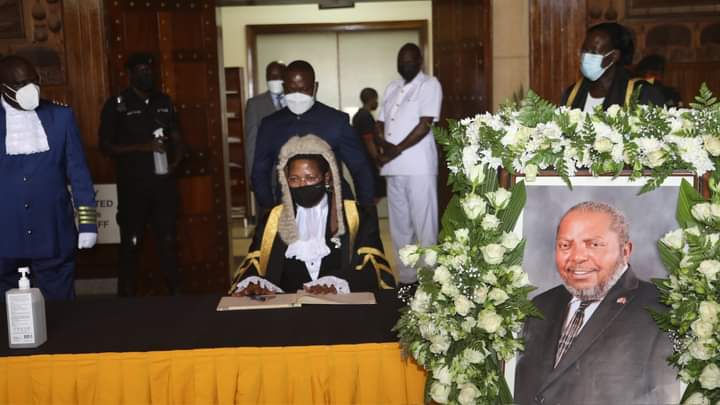 Soon after making her tweet post about giving the family of former Governor Emmanuel Tumusiime Mutebile the house they are occupying in Kololo The Deputy Speaker Anita Among called a meeting with her team of Mafias at Parliament to see how they could further push their scheme of fleecing Mutebile’s wife Betty of 5 billion under the guise of getting her the kololo house.

The Deputy Speaker is rumoured to be under pressure from Businessman Karim Hirji who is now demanding arrears in rent from Anita who had promised to buy Karim’s house along MacKinnon road but failed and from banks as well as money Lenders who are demanding billions they lent out to Anita.

The team included Mps Solomon Silwanyi,David Kabanda,Elijah Okupa among others,her communications officers Joseph Sabiti and Rajab Kaaya among others who she told to circulate information about the inability of the Mutebile’s to sustain life after the demise of the Governor.

This was the reason her tweet was widely circulated on social media platforms though it later attracted alot of trashing from sections of the public who questioned the integrity of the Deputy Speaker and the interest in this matter.

Anita and her team hatched a plan on how they will pursue the matter when it comes on the floor to ensure it is concluded giving them authority to be in charge of the matter to it’s financial target.

This is how the matter found its way on the floor of the house moved by Bukoli county MP Solomon Silwanyi and later backed by a section of the mps including Medard Ssegona as the Leader of opposition Mathia Mpuuga looked on in affirmative.

Although there were diversions created by Mityana MP Zaake Francis who tried to question why government was spending a lot on the burial yet they needed a house,he was quickly diverted by an amendment to the motion initiated by Ssegona and the matter was successfully settled according to Anita’s plan.

Anita promised to visit Mutebile’s widow later after burial to discuss modalities on how she will be taken to the President for a disguised meeting but the ulterior motive was to ask for money and eventually keep tossing her to frustration.

Because of her shrewd nature this was intended at ensuring that no one else comes in to divert her deal because she urgently needed money to sort out her pressing debts.

She further called the Chief Whip Thomas Tayebwa and assured him of how she was in charge of that issue and that she had already briefed the president about it thus there was no need for anyone else to follow up.

Anita is now under pressure after a section Bakiga leaders have called the President and briefed him about the ugly side of the Deputy Speaker whom they accuse of embarrassing their dead colleague for her financial gains.

They questioned how among all the notables including Ndugu Ruhakana Rugunda,Amama Mbabazi,Amos Nzeeyi, among others the widow confided in Among who does not even hail from Kabale.

This explains why Among never attended the send off prayers at Kololo and later the burial in Kabale as this would almost get her in hot soups following the arrogance and greed she exhibited as the Kololo vigil and while presiding over plenary.