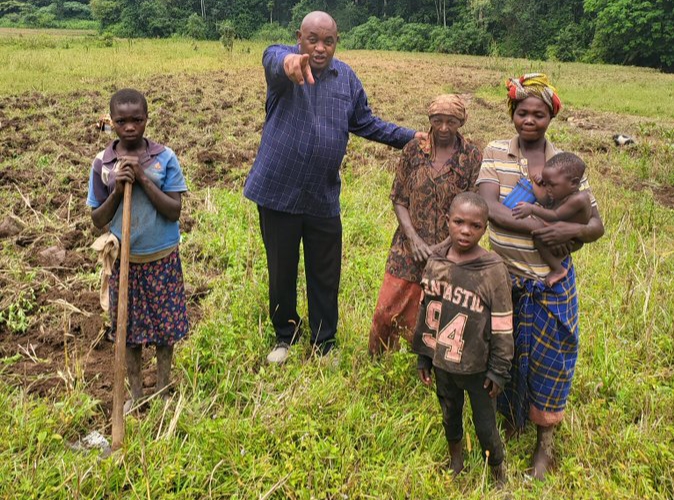 Minister of information and National guidance Dr. Chris Baryomunsi has fled into hiding after Ugandans pounced on him on Twitter over a stunt he made in Kanungu district on his weekend trip to his constituency.

In the staged stunt, the Minister who is well known for his being mean having donated a worn out log to serve as a bridge in his constituency, visited a garden and met a family going about its errands.

A source in the Minister’s security detail revealed to this reporter that he was planning to restore his image to the public having made insensitive statements about the two torture victims; Kakwenza Rukirabashaija whom he declared a diversion from ADF war in DRC, and Samuel Masereka whom he pronounced an ally to ADF.

“He has been underfire. He feels the pressure. That’s why we planned for him an activity that would paint off the dark side of him,” the security team member reveals.

“Today, I met Tukamushaba Afia, 14 yrs (holding a hoe) digging with her mother in Kiziba, Kanungu. She dropped out of school in P.3 because her parents cannot afford 30,000 shs per term. I have made arrangements to get her back to school. UPE should be made free and compulsory”

kiga Bae@kigaBae2·19hReplying to @CHRISBARYOMUNS1You have been our mp since my childhood 4 terms and you have the guts to post this??? Tokashwara mazima?? What have you done for us?? What??? Look at all schools in kanungu maxima next term I will decampian you and mind you don’t come back, we shall do what we did to Elizabeth

🔴Tired Muzzukulu@TiredMuzzukulu·Feb 13Replying to @CHRISBARYOMUNS1And you think we’re in the struggle for nothing? The thing shouldn’t be going to school just to attain education, the thing is everyone should and must get a job after school. The education sector is dead, do u know how many Ugandans finished S6 and stopped there? Make research

Nabaasa Innocent Amumpaire 🇺🇬@NabaasaInnocent·23hReplying to @CHRISBARYOMUNS1Honorable Minister,with due respect you can do better then educating one girl in a district with thousands of such girls out of school!
You have the capacity to advocate for Free UPE, why lament on Twitter 🤷🏿‍♀️.
Lastly, pay 30k in all UPE schools to unable more kids go to school