More pressure on Among as unknown youths dump piglets near parliament 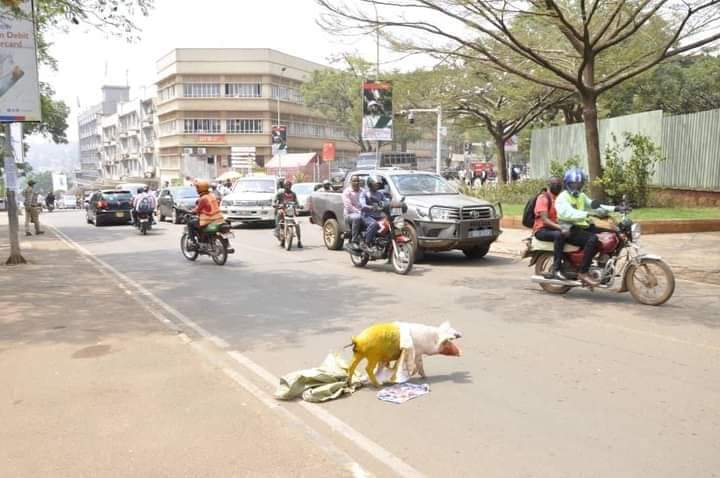 More pressure is piling on the Deputy Speaker of parliament Rt. Hon. Anita Among as protests calling for her resignation continue to take the centre stage. Just this Wednesday morning a day after a group of torture survivors stormed her Nakasero based residence, a team of youths dumped yellow painted piglets near the parliamentary precincts.

SEE ALSO: Impunity as Among hides guard who kicked journalist

No arrest was instituted as the protesters fled with aid of Boda Bodas immediately after dumping the piglets near parliament.

Anita Among was inside the parliament chambers according to credible reports. One of her aides says she was a bit upset when she was informed that nobody was arrested after the pig demo.

Meanwhile, police have not made any arrests yet related to the demo. The piglets have been confiscated and taken for safer custody at Central Police Station in Kampala.

No activists’ group has claimed responsibility for the piglets dropped today at parliament.

It should be noted that the tendency of dropping piglets is not new on Uganda’s political arena. In the recent past, aggrieved youths under the Jobless Brotherhood umbrella have been expressing their grief with the mass unemployment by dropping yellow piglets at parliament. The yellow color symbolizes the ruling NRM party which they accuse of masterminding the poor governance in the country. The reason why parliament is chose as a convenient spot for the piglets is that it is a key arm of government which extravagantly wastes taxpayers’ money.