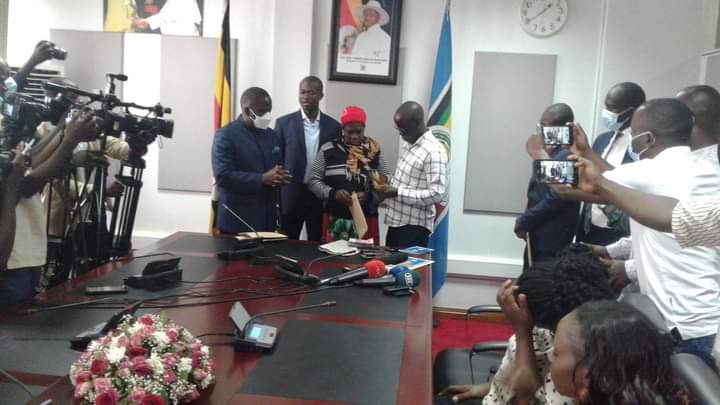 In some of the PR stunts laid by her chief strategist Joseph Sabiiti, Among who has been facing public scrutiny was advised to make a move that will appear to be charity and attract for her some media praise. A source familiar with the plana says Among in a bid to jump out of the hot frying pan over her row with Zaake was urged to reach out to the desperate mother to jailed NUP MP Muhammad Ssegirinya. In the deal, she was to parade the elderly woman before cameras and deliver a handout to her to appear as if she has parental instincts. The entire idea was to show that she is more concerned about the welfare of the relatives and families of the embattled NUP lawmakers who’ve spent over 5 months on remand. Together with her colleagues like David Kabanda, Among delivered a lump sum of money of about UGX 15m in total and distributed UGX 5m to each of the present family members of the jailed NUP MPs in this case Ssegirinya’s wife and mother, and Ssewanyana’s wife.

SEE ALSO: Among hires PR experts to clear her image

Social media has become a centre of conflicts between embittered Ugandans who have roasted the Deputy Speaker for using the vulnerable families to revive her ailing image. In some of the comments collected by our reporter, Ugandans have slammed the Deputy speaker and tasked her to pen down an apology for exhibiting the highest level of insensitivity.

Mukwaya Alex says, “Indeed Anita Among is a mafia just like Munyangwa Mugati gwa baata stated. How sinful is this act of shame…what is the purpose of 15million. Is she holding Segirinya’s freedom at ransom by those miserable peanuts of 15million.Very shameful and rotten regime,” another user added, “They don’t need yo money, they have their salaries which is enough to feed the families of innocent prisoners. Among we know your target but guys just eat the money but let us stay focused. #M7FreeAllPoliticalPrisioners.”

Muganga John commented, “Take away their rights, make them beggars, give them peanuts before camera! God, how I hate these nrm people with passion!,” while Alice Nankinga says, “Freedom has no price tag.”