How the Russian-Ukraine war affects Museveni 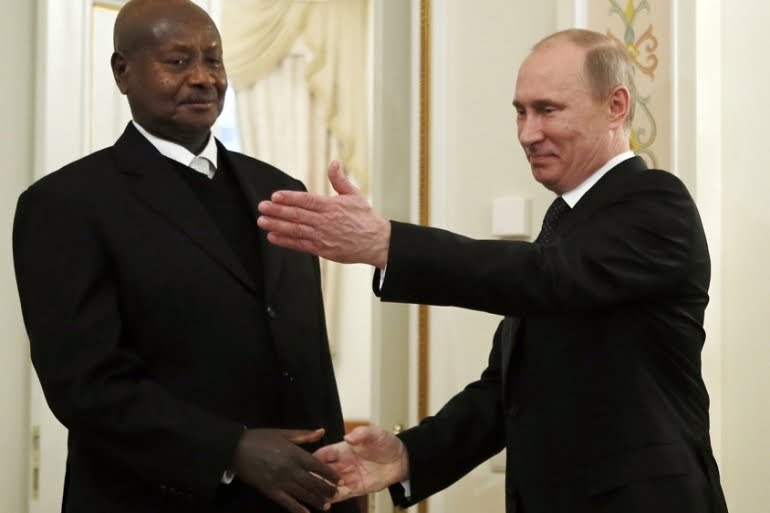 On Thursday this week, Russian troops acting on command of president Vladimir Putin invaded the Ukrainian territory amidst global tensions and condemnation. In her justification statement Moscow claimed she was liberating the people of Ukraine from a silent genocide sanctioned by Kiev. Putin wants to topple the government of president Volodymyr Zelensky.

SEE ALSO: Opondo to religious leaders: dare us, we fight back

A UN security council vote to call off the war did not materialize as some members like India, UAE abstained from the vote prompting the delegates to refer the matter to the next level for the 195 members to cast a vote to it. Russia vetoed a UN Security Council resolution on Friday that would have demanded that Moscow immediately stop its attack on Ukraine and withdraw all troops, a move several Council members said was deplorable, but inevitable.

While 11 of the Council’s 15 members voted in favour of the text, China India, and the United Arab Emirates abstained.

Although the African Union under its leader also Senegalese president Macky Sall issued a comment tasking Moscow to call off her aggressive stance on Ukraine and consider round table talks, nothing in that regard has been done.

In East Africa, it is only president Uhuru Kenyatta of Kenya who has openly criticized Moscow for invading Ukraine.

“Kenya registers its strong concern and opposition to the recognition of Donetsk and Luhansk as independent states,” the country’s Ambassador Martin Kimani said during a UN Security Council meeting late on Monday.

On the other hand, Gen. Yoweri Museveni who is one of Africa’s longest serving autocrats and a staunch Putin ally has like Chinese leader Xi Jinping abstained from overtly criticising Moscow. Gen. Museveni has in the past been heard lashing out at the West declaring them a bunch of hypocrites. In his 2021 inauguration speech after securing a fifth term, Gen. Museveni criticized the West under NATO for their 2011 Libyan invasion. Museveni bitterly reiterated that he and some other African heads of state like Jacob Zuma were ready to intervene militarily. Museveni has always accused the West for meddling in the governance of African nations. He adds that it is the west which facilitates the opposition in African states which he reiterates that fuels conflicts. He has often been heard referring to his nemesis Kyagulanyi Ssentamu Robert aka Bobi Wine as an ally of the West.

What the war means to Museveni

If the Moscow battle rages on for more than the anticipated time, Gen. Museveni is likely to lose the military aid he has been receiving from Vladimir Putin in case he does not overtly pronounce his position on the war. Putin may in the near future require solidarity statements from his allies like Gen. Museveni, Iranian PM, China, to mention but a few. But Museveni is caught between the lines and cannot make such a mistake as he needs aid from either sides of the West (IMF and World Bank grants and loans) plus the military assistance from Moscow.

Moscow was amongst the very first states to open up embassies in Kampala immediately after the latter attained independence from Britain. Moscow’s consulate in Kampala was opened between 11-12, October 1962.

Moscow aid to Uganda is mainly military unlike the west which tackles infrastructure projects, health and education amongst other key sectors.

In 2011, Rosoboronexport, a Russian firm supplied six Russian-made Sukhoi fighter jets to Uganda in a deal that was said to be worth at least $744m. It was mired in controversy when it emerged the money was obtained from the Bank of Uganda, without parliamentary approval.

In later years around 2015, Uganda media claimed the army was requesting $168m to buy military equipment and the Ministry of Defence had already negotiated a procurement loan of $170m from a bank in Russia with help from Rosoboronexport.