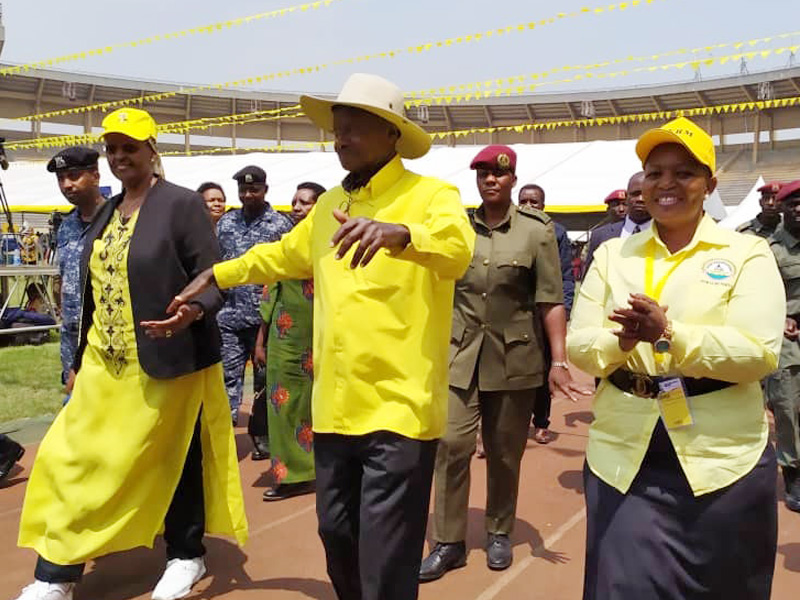 In a video that has enveloped social social media platforms, a man whose identity is unclear aged in the 40’s is seen tied in what’s commonly known as ‘Kandoya’ with barbed wires, his mouth gagged and a dripping burning jerrycan is painted on his back by men purportedly putting on yellow T.Shirts branded with NRM.

The identity of the person conducting the heinous actions is still unclear though towards the end of the clip, his shirt shows the NRM initials meaning he is linked to the ruling party.

By the time of filing this story, Police had not yet addressed itself on the incident.

Engaged for a comment, the NRM head of communications Hon. Emmanuel Dombo Lumala disregarded the authenticity of the video saying ‘anyone can don in the NRM party outfit just to ruin its image’. He adds that even NUP supporters can fabricate such a scenario just to downplay the achievements of the NRM. “We are in a digital world. This could be a distorted clip. We are not sure if this person in yellow is our member,” Dombo said.

Though the NRM claims it does not condone torture, there have been multiple scenarios of dissenters facing the security wrath. Kasese NUP coordinator Samuel Masereka was thumped to pulp by the CMI, while celebrated author Kakwenza Rukirabashaija was tortured by the SFC allegedly acting on the command of the first son Lt. Gen. Muhoozi Kainerugaba.

Efforts to censure the security Minister Maj. Gen. Jim Muhwezi did not harbour fruit after MPs from the ruling NRM party were mobilized by then Chief whip Thomas Tayebwa and asked not to append signatures to the censure motion. Out of the 104 MPs who constitute the opposition in the 529 member parliament with NRM dominating, only 88 opposition MPs signed the censure. his itself signalled that the NRM perhaps condones torture in some way.