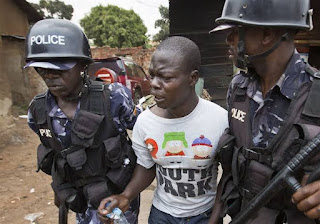 The Territorial Police in Kampala Metropolitan Police (KMP) South and Nansana Division has arrested a notorious gang leader, identified as Lubowa Geofrey alias Jeff, who was behind the wave of armed robberies, sexual assaults against women, burglaries, and swash-and-grab attacks in Nansana Division, according to police spokesperson Fred Enanga.

Enanga said that Jeff and his other accomplices, who are still at large, last month while armed with pangas, attacked Turinawe Robert, a businessman dealing in gas, while heading home with his daughter, Sarah Nuwasiime, and robbed them of cash, Shs7.5m, and three smartphones.
They also vandalized his vehicle, before getting away on two bodaboda motorcycles.
“The suspect has been a notorious bouncer, who was arrested in 2017 – 2018 in the women murders, in Nansana and Entebbe. And in the year 2020, he was arrested for assaulting a Police Officer, who had gone to arrest him, for burglary and theft. He is a former convict, released 5 months ago,” said Enanga.

He explained that Jeff was tracked down and arrested last week, at 3:30 am in Ochieng ward in Nansana Municipality.
“Upon search, he was found with two common flagged jackets used in robberies, two black T-shirts labeled security, housebreaking implements, and opium,” he said.