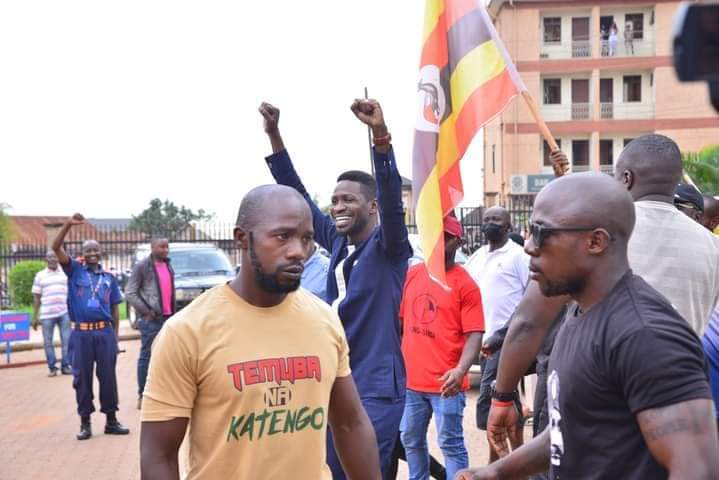 On Saturday, National Unity Platform party president Kyagulanyi Ssentamu Robert aka Bobi wine in company of his gendarme of supporters thronged the Buganda kingdom leaning broadcaster dubbed BBS Terefayina where he was to be hosted to discuss the prevailing state of affairs as a leader harbouring people’s hopes.

Wine, a one time presidential contender with a record breaking performance of having an unprecedented number of legislators in an NRM dominanted parliament, remains an influential figure. In his rhetoric at a show hosted by veteran journalist Kaddu Mukasa, Bobi roasted the NRM regime on a barrage of issues covering the social, economic and political life of the public.

He decried the regime for continuously trading a tribal narrative that he says shall divide the people of Uganda. He says this is deliberately scripted by Gen. Yoweri Kaguta Museveni whom he accuses of being afraid of a united force of people. Wine stated that he once interacted with the deceased Kasirye Ggwanga and tasked him to explain why he had agreed to play pawn for the regime. Wine says he took that path to ascertain if members of the armed forces actually believed in Gen. Museveni. He says on the contrary, so was not the case and in his findings, he learnt that even Kasirye was not at peace with most policies of the NRA.

On the surging prices of essential commodities, Bobi appealed to the population to sober up. He says the hefty prices are politically indiscriminate as they equally affect people from all denominations. He lambasted the regime for failing to do enough to curb the situation.

On his political take on DP president Norbert Mao’s endless rants on NUP, Wine says he unbelievably watched on as the veteran politician launched attacks on his fellow opposition players. Bobi reiterated that this though did not take away the respect he has for the first Mao he met in 2018. He says that’s the Mao he cherishes and respects.

Asked about his take on the uncensored commentaries of Turkey based blogger Kajjubi Fred Lumbuye, Bobi says he has no control on people freely demonstrating their freedom of speech. He says he however most times comes in their private messaging icons to try to guide on what conversations they can publicly make though that does not necessarily mean he has control over them and what they say.