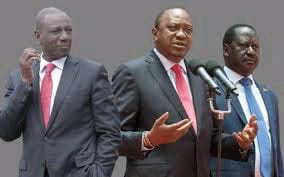 Kenya’s outgoing president H.E Uhuru Mwigai Kenyatta has on Sunday, May 1, 2022 taken a swipe at his Deputy President William Samoe Ruto for being a stumbling block to his administration.

Kenyatta says Ruto is fond of absconding his duties and sabotaging government programs by engaging himself in attacking the executive.

Speaking at Nyayo stadium in Nairobi during the Labour Day celebrations, Kenyatta asked the United Democratuc Alliance leader, Ruto to tender in his resignation from office so that he can appoint someone ready to serve the people other than one going behind his back, blaming the government (and communing with adui) without coming with a solution to problems facing Kenya.

President Kenyatta has since the beginning of his second term as leader of the Republic of Kenya publicly attempted to sideline Ruto, introducing the Building Bridges Initiative and the Handshake.

Netizens however told the President that all the efforts made Mr Odinga a co President of the Republic of Kenya and now is the time to end Political dynasties in the leadership of the Republic.

Deputy President Ruto and Former Prime Minister Raila Amuro Odinga, in what has been termed as a two horse race are competiting to replace Uhuru Kenyatta as the President of the Republic of Kenya.
The election is scheduled for August 9th this year. Opinion polls have severally indicated that Deputy President William Ruto is the leading contender in the race.