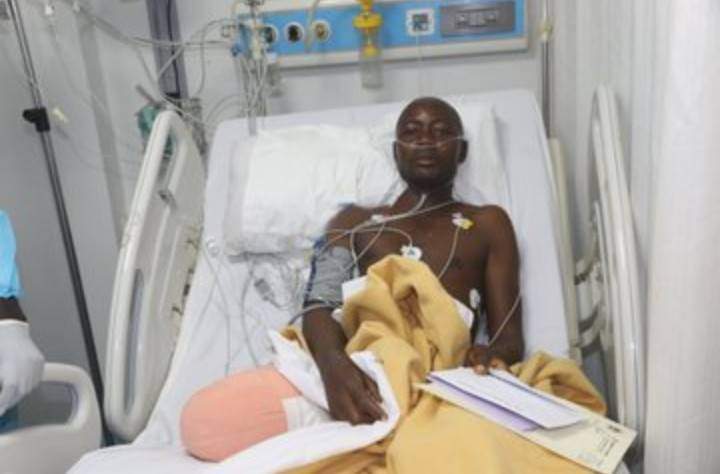 Robert Mukebezi, a traffic police officer who was shot at by soldiers attached to the UPDF earlier in January this year has decried neglect and absence of justice 5 months since the tragedy occured.

Mukebezi was amputated after a bullet discharged by a one Bashir Mango hit his artery vein prompting medics to institute a surgery to save his life.

Mukebezi says he was since neglected and left to struggle on his own yet he has to support himself and the family.

“I have never got justice despite pledges by the army to have the perpetrators apprehended. I was shot by 3 soldiers of the UPDF. One was a Major. He drew a pistol and shot at me but he missed. His junior officer, a corporal drew out and AK 47 rifle and shot at me,” Mukebezi recounts. “I was only saved by civilians who witnessed the altercation. I pleaded for my life as these soldiers recklessly shot at me. I have made inquiries to establish if the errant soldiers were brought to book but to my surprise, 5 months later none has been punished,” he added.

Mukebezi says he is glad that the same thing has been witnessed 5 months since his own tragedy occurs. “I thank God that we are now witnessing more of the same. The only difference is that this one has been captured on camera,” he says.

Mukebezi adds that since his shooting, he has only received UGX 1.6m from the Uganda Police Force as compensation.

“I only got 1.6m for my entire treatment. The army made pledges but todate I’ve never got anything. When I approached police to inquire how my matter was being handled, I was told to avail accountability for the first money I was given. They want a receipt for every item I purchase even if it’s merely salt,” he says. “I am a born again. I just want justice,” he tearfully adds.

Mukebezi’s lamentations come days after another traffic officer, Omara was nearly shot at and killed by private Tumwiine, a military officer.

“My sources told me he is only after money,” Kulayigye retorted. “The culprit Bashir Mango is still at large and as army we are hunting for him,” he added in response to whether the errant officer was captured.

Media outlets have reported that Mukebezi has been withdrawn from the medical treatment scheme facilitated by the UPDF.

In 2019, NRA veteran Ambassador Maj. Gen. Matayo Kyaligonza was also captured on video holding a traffic police officer Namaganda in Seeta where she attempted to block his motorcade after they made an illegal u turn in the road.¢