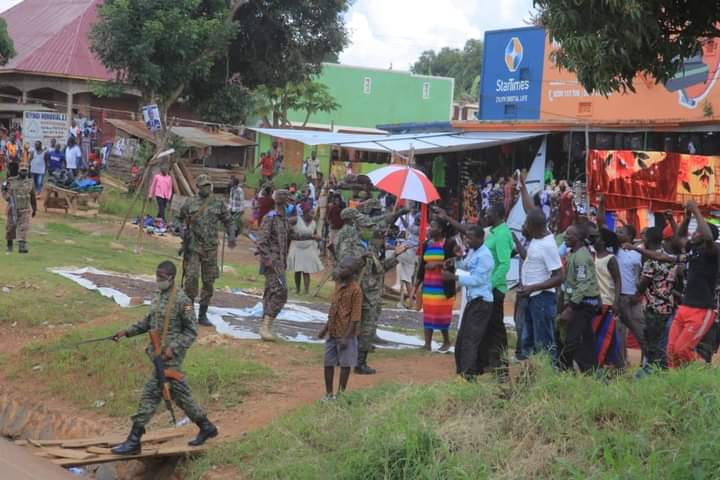 Hours after the UPDF representative in the eleventh Parliament Lt. Gen. Peter Elwelu proclaimed the army as a pro-people entity during the conveying of his apology over the acts of private Tumwiine who grabbed a traffic police officer Omara by the collar in broad daylight, the army has yet again been caught up in another life threatening scuffle.

This morning while appearing on the NBS Morning Breeze show, the UPDF spokesperson Brig. Gen. Felix Kulayigye reiterated Elwelu’s remarks by insisting that the UPDF is a ‘people’s army’.

“We believe we are the people’s army, and we want to continue with that character,” he said, adding that, ”What happened on the road isn’t impunity. It’s individual indiscipline. We train these young men and women for nine months. They spend over 25 years in society before they join the army. If we socialise our children to be responsible citizens, that is what you reap and vice versa.”

Now this very morning, local press in Masaka have registered yet another egregious incident in which a trigger happy yet to be named UPDF solier opened fire at mourners injuring one instantly. The incident occured in Bukalata fishing site in Kabasese, Katyanga at the dock in Masaka district.

It is said mourners who were returning from the burial of one of their colleagues only identified as Arnold were shot as they expressed discontent with the local authorities over a hippopotamus that repeatedly hacks them to death. The deceased Arnold was the 8th person in a space of weeks to be hacked by the hippo.

It is alleged that as protesters peacefully marched, UPDF soldiers attached to the Masaka fishing unit opened live ammunition and injured at least one person who has been rushed to hospital in a very critical state.

By the time of filing this report, the UPDF spokesperson had not been briefed about the incident as he was in NBS TV studios defending the image of the army.