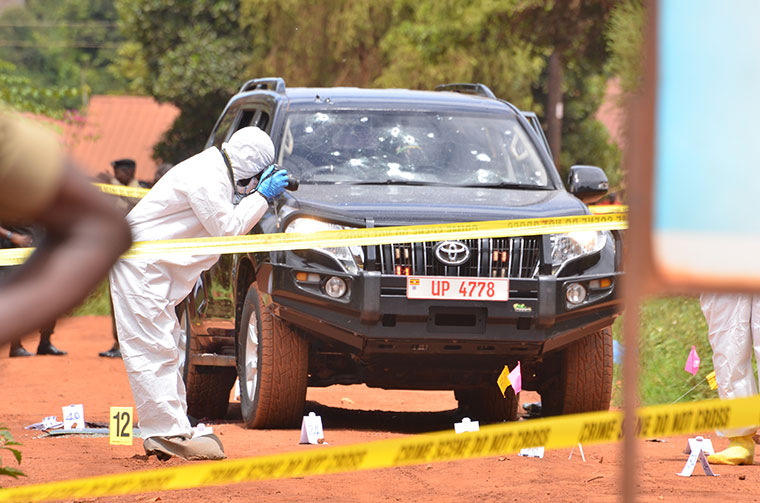 On the 21st of March 2017, days after the former police spokesperson Andrew Felix Kaweesi was gunned down at his residence in Kulambiro, Wakiso district, Atanasi Abdurahman Zziwa a resident was under police islamophobic tendencies pounced on in a taxi he was traveling in to Kasese and arrested on allegations of killing the former Assistant Inspector General of Police.

A physically disabled Zziwa passed on last year and left behind a helpless wife and children who grapple with the harsh economy to make ends meet.

According to his wife Gertrude Nasuuna, who was interviewed by NTV, he died without ever receiving treatment for the grave injuries he sustained as a result of being tortured from the infamous Nalufenya facility.

The wife narrates that Zziwa was hand picked from a Kasese-bound taxi for failing to properly identify himself as he lacked his National Identification Card. Zziwa was that fateful day transferred to Kasese Central Police Station where he was temporarily held before being hooded and transferred that very night to the Special Investigations Unit facility in Kireka.

The wife reveals that Zziwa was subjected to intense torture that totally disabled him to the final moments of his life.

“In his dying moments, he told me he was handcuffed and his legs conjoined to his hands and suspended in space to hurt him intensively and lure him into agreeing that he had killed Kaweesi,” narrates Gertrude, a mother of 2. “His health deteriorated tremendously prompting his captors to contact me to stand for him surety so he could attain a police bond from Nalufenya. I was told to come with one other person to help me transport my half conscious husband. We could not afford to treat him in hospital and we opted for home care,” she adds.

On Zziwa’s chargesheet, the state had preferred murder and terrorism charges on him but surprisingly the case was never sanctioned by the state attorney even after his demise. Zziwa was the bread winner of his family and his death has largely impacted on the family he has left behind in the city outskirts of low income suburb of Kyebando. His children are now unable to attend school. They spend the entire day picking up plastics for survival. A kilogram of plastics is sold at UGX 500 which is far less than the $1 an ordinary Ugandan is supposed to utilize on a daily.

5 years into the murder of the late AIGP Kaweesi, dozens of the Muslim clerics who were wantonly arrested have been acquitted of all the charges as state lacked evidence to implicate them. The case of Zziwa is unique in a sense that he was never prosecuted. This is yet again another case of state acting with impunity and no legal reprisals are achieved by the relatives of the victims.

Contacted for a comment, the Uganda Police Spokesperson CP Fred Enanga denied knowledge of Zziwa’s ordeal stating that he will first have to make consultations.