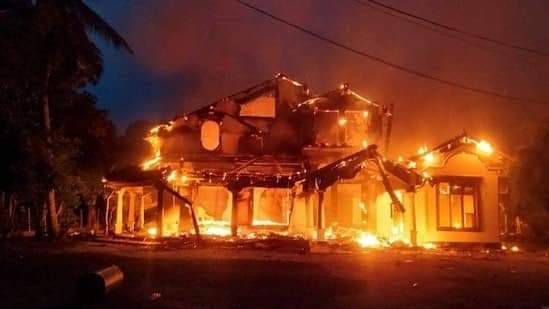 Houses of several lawmakers of Sri Lanka’s ruling party were set on fire by anti-government protesters, claiming they were behind the mob attack on Galle Force demonstrators, local media reported on Monday.

This comes hours after a Sri Lankan parliamentarian of the ruling party of the Rajapakasas, Amarakeerthi Athukorala, and his personal security officer were killed in clashes between anti- and pro-government protesters in the country.

Earlier in the day, Mahinda Rajapaksa, who has dominated Sri Lankan politics for nearly 20 years and whose government crushed the Tamil Tigers to bring an end to a long civil war, was forced to resign as the prime minister as anti-government protests took a violent turn after shortages of fuel, food and medicine brought thousands on to the streets in more than a month of unprecedented crisis.

At least three people, including an MP, have been killed and over 150 wounded as government supporters armed with sticks and clubs attacked demonstrators.