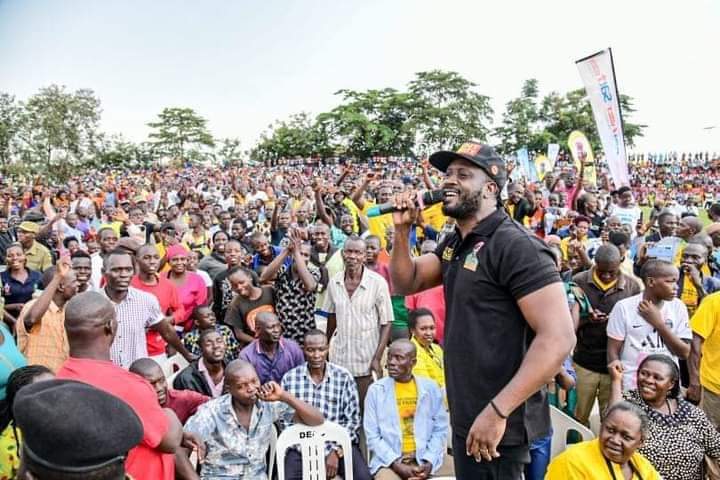 SEE ALSO: Bebe Cool threatens to join NUP if UNEB does not give son special exams

The self proclaimed Gagamel boss encountered a barrage of humiliations from disgruntled revelers at Kakindu stadium in Jinja city. Bebe whose elderly music career has waded through embarrassments in recent time whereby in some scenarios he would even be hit with bottles, again carried the moment when some revelers were overheard shouting obscenities at him.

“Why don’t you just give politics a break? You are a flop. At your age you should not be fighting with young artistes like King Saha,” shouted one of the revelers. “Zakayo (to mean Saha’s new hit song) please go and take care of your family,” another reveler shouted at the helm of his voice.

All the heckling and booing took the centre stage with Bebe Cool seeming unbothered. The 48 year old singer went on to entertain his guest, Lt. Gen. Muhoozi Kainerugaba who looked angrily at the unruly crowds.

It remains unclear as to why Lt. Gen. Muhoozi is persistently showing up for public events. His taskforce team headed by events promoter Balaam Barugahare is reportedly using state funds to mobilize young people to grace the political aspirations of Museveni’s eldest son.