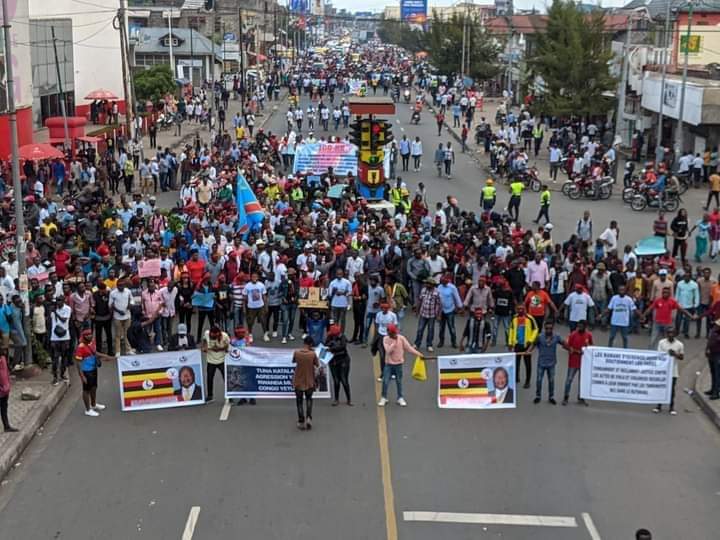 Tensions are boiling within the Eastern DRC city province of Goma where residents have taken to the streets in protest of the alleged Kampala-Kigali backing for the notorious M23 rebel outfit. The whole of Wednesday was a chaotic venture in Goma after citizens battled with the local police that was deployed to restore calm.

The protests were preceded by boiling tensions between Kigali and Kinshasa with each exchanging sentiments. Kinshasa believes Kigali is directly sponsoring and facilitating the Hutu speaking M23 rebel group that has made the Eastern DRC ungovernable. The M23 rebel group is one of the active 120 armed groups terrorizing the citizens of DRC.

On Wednesday during plenary in the Kinshasa parliament, a lawmaker pinned the Ugandan Commander of Land Forces Lt. Gen. Muhoozi Kainerugaba with being the mastermind of the insurgency. The Congolese MP said he had sufficient evidence to implicate the Ugandan elite presidential guard dubbed Special Forces Command to be having direct contact with the M23 rebels. The MP went on to say the Congolese government forces were directly battling SFC troops fighting alongside the M23 rebels.

His comments have since attracted the attention of Muhoozi who is now pleading to have round table talks with the DRC president Felix Tchisekedi. Muhoozi took to Twitter to express his dismay with the serious allegations being raised against him and the SFC.

In a tweet he authored yesterday, Muhoozi said, “I hear someone in the DRC parliament said that ‘Muhoozi is an enemy of Congo’. Me? So an ‘Enemy’ of DRC is one who saves people in North Kivu and Ituri from being slaughtered by ADF in ‘Le triangle de la mort’? ..”

President Uhuru Kenyatta has called for immediate ACTIVATION of the East African Regional Force meant to help restore peace and security in the eastern Democratic Republic of Congo. The Regional Force shall be deployed to the Ituri, North Kivu and South Kivu provinces