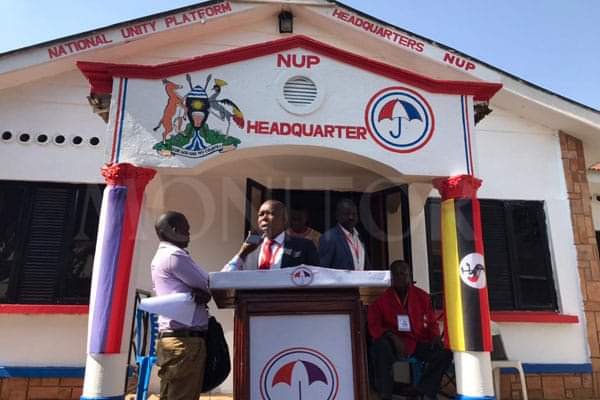 With the alleged backing of the speaker of Parliament Rt. Hon. Anita Among, Mr Gideon Tugume, the secretary for information for Moses Nkonge Kibalama NUP-led faction has this morning launched their defacto head offices this morning in Rubaga division, Kampala.

Mr. Tugume is apparently talking to the press as he unveils the party’s newly created headquarters in Kabowa, Rubaga division, Kampala.

Credible sources say the Kibalama group is being financially facilitated by the Parliament speaker Anita Among who seeks to fuel the infights within the National Unity Platform party. It is said, she even plans to influence a group of NUP MPs who were enraged by the shame associated with the UGX 40m heist. The said MPs will towards 2026 officially denounce the Kamwokya establishment and create their own political group with the same party symbol and logo.

Approached for a comment, the NUP party secretary general David Lewis Rubongoya declined to speak to the media saying they are still assessing the situation.

It should be recalled that a 2020 court verdict issued by justice Musa Ssekaana authenticated the leadeship of the NUP party headed by Hon. Kyagulanyi Ssentamu Robert aka Bobi Wine as the party president. The learned judge nullified all the points raised by the Moses Kibalama group.