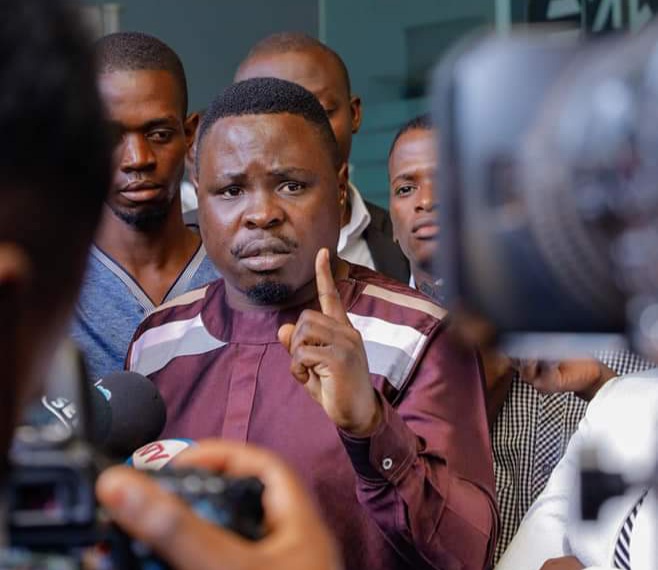 Mityana municipality Member of Parliament Zaake Francis Butebi has given Gen. Museveni a stern warning should the court of appeal fail to consent to the bail application of the jailed NUP lawmakers Allan Ssewanyana and Muhammad Ssegirinya.

An embittered Zaake spoke to media moments after the court adjourned its ruling to June 29 on which they will approve or reject the bail application filed by the jailed NUP MPs’ lawyers.

“We are tired of the courtroom English at the expense of the freedom of our comrades. Our tolerance will not exceed June 29th when court pronounces itself on the matter,” Zaake warned. “Should court where our hope now lies fail to administer justice, we will rally Ugandans to rise. The people of Kawempe North and Makindye West shall rise to challenge Museveni’s insensitivity and dictatorship,” he added.

During court, the state prosecutor Richard Birivumbuka objected the bail application citing a 2005 court case where he claims the presiding judge declined to approve bail to a suspect as the case had not been ruled. Birivumbuka says the court had neither sentenced nor convicted the accused and on those grounds declined to grant him bail. One of the presiding judges questioned Birivumbuka to read the said case number for purposes of record but the state prosecutor did not have facts to back his arguments.

One of the MPs Allan Ssewanyana informed court that they need specialized treatment following their torture. He says they were manhandled and “their private parts damaged during their re-arrest,” ”

The Judge directed prisons authorities to take the suspects to Mulago national referral hospital for specialized treatment and care.

The warder Kabuye Ronald from Kigo prison objected the directive claiming the prisons service has sufficient facilities to handle their ailments.

“As far as the medical issue is concerned, our medical team is handling it very well. The condition is not bad, my Lord,” said Mr. Ronald.

“The suspect went off the video to go and vomit. We all saw that. I direct that every 7 days they are examined. They should be treated by Wednesday 29 when we come back. The specialist should know whether they need referral, not you (warder who is not a doctor),” one of the judges, Eva Luswata reiterated.

Veteran human rights lawyer Ladislus Rwakafuzi teamed up with Hon. Shamim Malende, Erias Lukwago and Bwowe Ivan who are the lead lawyers in the case.