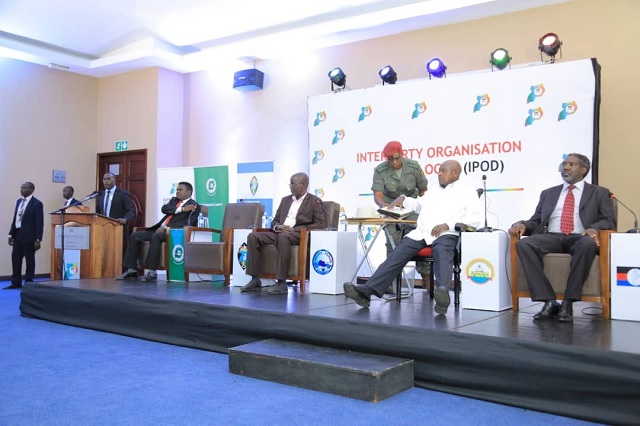 Museveni has already signed the new Memorandum of Understanding that seeks to renew the operation of the Inter-Party Organization for Dialogue-IPOD. This comes at a time when the funding of the IPOD is being heightened to UGX 35 billion.

The head of IPOD Mr. Frank Rusa says the chairperson of the ruling NRM party Gen. Yoweri Kaguta Museveni signed on the new MoU on Tuesday, followed by the Democratic Party president general Norbert Mao. UPC, FDC, PPP and NUP have not yet appended signatures to the new MoU.

Mr. Frank says he has contacted the NUP leaders to make the offer known to them. He adds that the door is open for NUP to be part of the new IPOD whose contract is to run up to 2026.

“Any time NUP considers joining, the door is open for them. They are a political party with active membership in parliament. So we will leave the door open for them,” he said.

However the NUP spokesperson Joel Ssenyonyi says their stand as a party remains undeterred as they are determined to shun the IPOD arrangement which they accuse with being a sanitizer for the regime.

“IPOD was good 10 years when it came into existence. But time on, it has become a sanitizing wing of Gen. Museveni. He uses it to posture as a democracy and account to the donors,” Ssenyonyi said. “We can’t be party to IPOD which is more of a tea party, yet we have our supporters languishing in jail. Even our party activities are sabotaged by government security forces with impunity,” he adds.

FDC spokesperson Ibrahim Ssemujju Nganda says they may emulate the NUP after thorough assessment of the relevance of their subscription to the IPOD. He says they will sit as FDC and peruse through the entity and see if they should remain party to it or consider to exit.

The IPOD receives funding from the Netherlands Institute for Multiparty Democracy.