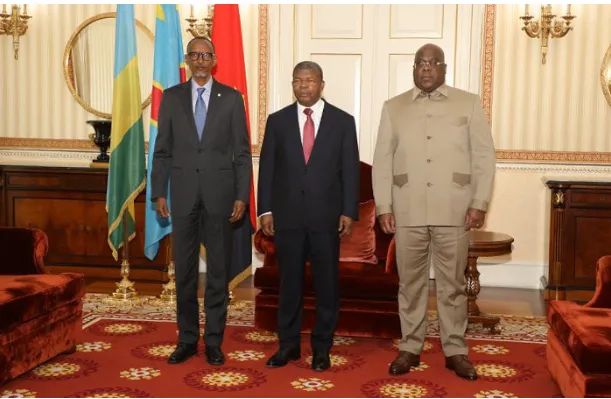 The latest dispute centers around the activities of the M23, a Congolese rebel group that has recently reemerged after a 10-year hiatus. The group has launched sophisticated military operations in recent weeks, overrunning the town of Bunagana near the Democratic Republic of the Congo border with Uganda and Rwanda. Congo has been adamant that the group’s revival comes with Rwanda’s blessing—as well as military backing.

Mélanie Gouby, reporting from Bunagana for Foreign Policy on Monday, spoke with M23 fighters who said they had lain dormant until now, surviving in the mountains along the Congo-Rwanda-Uganda border. “It remains hard to square how the group survived five years on an inhospitable mountain with the sudden, spectacular conquests of recent weeks,” Gouby writes.The increased tensions came after Tshisekedi invited troops from neighboring Uganda late last year to help combat a separate rebel group—the Allied Democratic Forces. Rwandan officials worry that Uganda will use the ongoing operation as a pretext to increase its own sphere of influence, raising the possibility that it will intervene.

Although historical grievances in the region run deep, there’s much more than pride at stake. Congo’s rich mineral deposits, particularly the metals needed to power the world’s electronic devices and batteries, have made the country a valuable target for its neighbors, which have profited from smuggling networks.
Congo’s resource wealth has helped make gold Uganda’s prime export, despite most of it originating in Congo. The same goes for the metallic ore coltan, which Congo’s neighbors export in large numbers despite not having close to the same reserves.

If he does decide to deploy military forces, Kagame is unlikely to face Western pushback. Kagame, who has helped build up the country’s position as a “donor darling” despite repressive policies and human rights abuses, has recently cast the country as a Western partner on immigration—inking deals with both the United Kingdom and Denmark to take asylum-seekers.
He’s also fresh off the PR victory of hosting the Commonwealth Heads of Government Meeting in the capital, Kigali, in June.

Aside from Tshisekedi’s efforts, the International Crisis Group recommends that Kenyan President Uhuru Kenyatta attempt to pressure Kagame on the issue. Not only is Kenya set to reap the trade benefits of Congo’s new status as a member of the East African Community, but it also acts as a security partner through its participation in the United Nations Force Intervention Brigade, which is charged with fighting rebels in Congo.

Claude Gatebuke, the director of the African Great Lakes Action Network, worries that the region could soon descend into wider conflict. “Without a vigorous confidence-building process between the two sides, a wider interstate conflict is a strong possibility,” Gatebuke told the Africa Center for Strategic Studies. “That would likely draw in Uganda and possibly Burundi on the side of the DRC.”