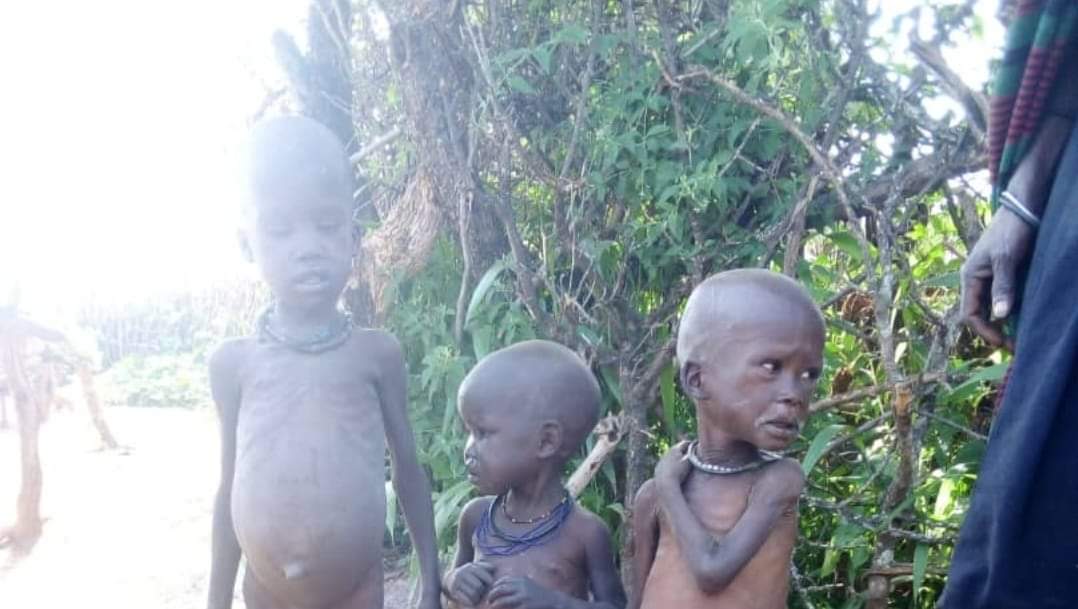 More than half a million people are going hungry in Karamoja, some 40 percent of the population of this neglected, long-suffering rural region between South Sudan and Kenya.

One of Maria Logiel’s youngsters, too weak to sit up, bears telltale skin lesions caused by extreme hunger. The other, strapped to her back, stares gauntly with sunken eyes.

“I came with these two because they were worse off, and going to die,” Logiel told AFP at a hospital in Karamoja, a vast and isolated northeastern border region afflicted by drought, disease and armed bands.

“(But) I left two others home, and I worry that by the time I get back, they’ll be no more,” the 30-year-old mother said.
“The child was not sick. It was purely the hunger that killed. You see, even this one is on the brink of death.”

As food has become ever more scarce, Karamoja’s most vulnerable residents are struggling to survive.

Starvation in Karamoja is going largely unnoticed as higher-profile crises, including looming famine in the Horn of Africa, and the war in Ukraine, compel global attention.

“If we don’t do something right now then if they survive by chance, then we don’t expect very good human capability, human capital in the future. Because these kids will not do well in school, they will be stunted and the development, brain and everything, will be compromised,” said Meri Jino, district chairperson Kaabong district.
The erratic effects of a changing climate — Karamoja is experiencing harsh drought, but last year witnessed damaging floods and landslides — have only multiplied the hardships bearing down on the region.

“In terms of acute malnutrition in this year we have experienced the worst that we have had in the last 10 years. And we are tracing this back to the issues around climate change, we have also experienced increasing pockets of insecurity as well as common childhood illnesses,” said Alex Mokori, UNICEF nutrition specialist.

Across the region, about 91,600 children and 9,500 pregnant or breastfeeding women are suffering from acute malnutrition and need treatment, according to the latest assessment by humanitarian agencies and foreign donors.

MPs appeal for help
The area lawmakers in a presser held yesterday appealed to the office of the Prime Minister for urgent relief to rescue the situation. Hon. Sylvia Awat, the Nabituluk woman MP rallied government to take urgent action. The MPs noted that some 76 people had died as of June 11 while 2000 were on the verge of dropping dead. They added that the toll is rampant amongst those aged 55 and above who can’t prevail through the crisis.

This website understands that of the 150,000 tonnes of maize flour donated 3 months back at the start of the crisis, only 4 Sub-Counties were served out of the 18 starved sub counties.

The prime Minister Robinah Nabbanja says action will be taken upon approval of a supplementary budget for the disaster preparedness ministry.