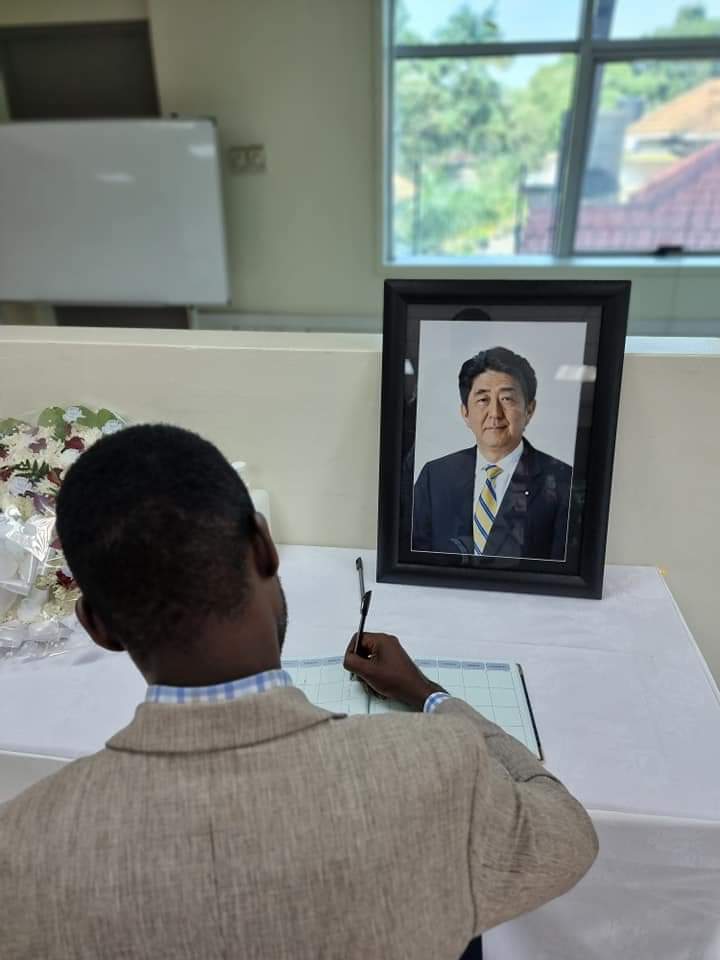 The former Japanese Premier who stepped down 2 years ago in 2020 was shot by a home made gun fired by a 41 year old local who accused him with making his mother bankrupt through a religious cult.

Shinzo was at a parliamentary campaign rally at the time the attacker fired bullets, in a country with one of the world’s toughest gun laws. The slain Japanese PM was accorded a state of art burial to befit his status.

Wine, 40, a Ugandan politician has tightened grip on his foreign policy, and political pundits have already credited him for looking for potential allies in case he takes charge of Uganda as head of state.

Today we visited the Embassy of Japan in Uganda to pay our respects and deliver condolences to the people and government of Japan for the tragic loss of their former Prime Minister Shinzo Abe.

Prime Minister Abe was assassinated last week by a gunman.
We commiserate with the people of Japan and continue to condemn in the strongest terms, the kind of unprecedented violence that led to the loss of this great leader, who served his people with dedication.
May his soul rest in peace.

Thousands of mourners Tuesday lined the streets of Tokyo to pay their final respects to Japan’s assassinated former prime minister Shinzo Abe as his hearse made its way to a small, private funeral.
Hundreds queued at Tokyo’s Zojoji Temple on Tuesday to lay flowers ahead of the ceremony, which was only open to close friends and family.
Crowds waved, took photos and called out thanks as the hearse carrying his body, accompanied by his widow, slowly drove past the packed crowds.