Minister Kasaija rallies Ugandans to pay taxes or ‘shut up’ 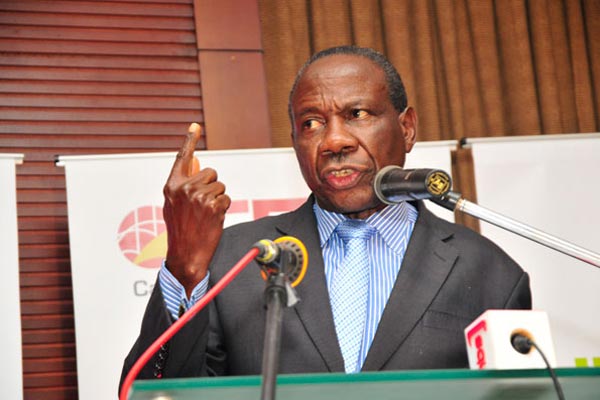 The Finance and economic planning Minister Hon. Matia Kasaija in a Monday press interview told journalists to deliver his message to Ugandans who keep defaulting on paying taxes yet they expect government to improvise effective service delivery.

SEE ALSO: Museveni orders Kasaija to secure UGX 630b for Tumwiine, Sejusa and 32 other UPDF retirements

Kasaija says Ugandans expect government to deliver services yet they are unpatriotic whenever it comes to commiting taxes.

“Give me (government) more taxes so that I don’t have to borrow. Give me taxes… stop complaining when I increase taxes,” he told Monitor in an interview.

He also teased the civil servants who expect government to increase their wages and salaries yet the taxbase is narrowing.

“If you are demanding salary increases, you want roads to be tarmacked, you want this and that. Then, I have got to borrow either internally or externally,” he reiterated.

It is the first time government has conceded that debt stocks have reached unsustainable levels having surged to above the 50 percent threshold in just less than two years.
While speaking at the launch of the National Development Plan III Mid-Term Review last week, Mr Lugoloobi, said public debt was now at 54 percent due to increased borrowing to mitigate challenges resulting from Covid-19 and other disasters such as locusts.

Economists fault government for incurring hefty administrative costs in terms of catering for the salary and welfare of a horde of administrators ranging from the 529 MPs, over 83 cabinet and state ministers, RDCs and the several security agencies.