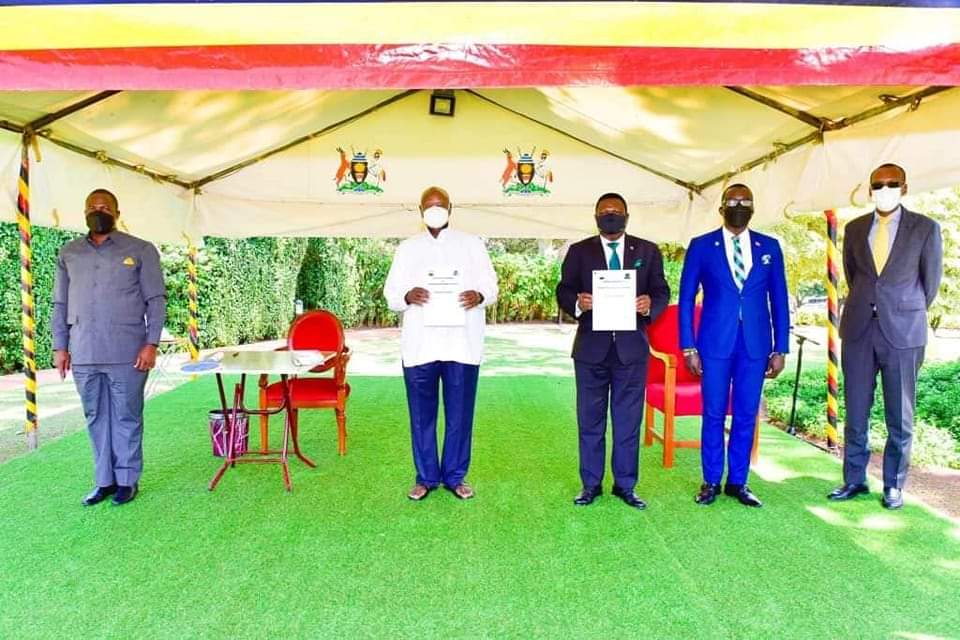 Supporters of Uganda’s oldest political party dubbed Democratic Party have lashed out at their president general Norbert Mao, a day after he signed a Memorandum of Understanding with the ruling National Resistance Movement party at State House, Nakasero.

In the company of the DP secretary general also EALA contender Gerald Siranda, Mao and Museveni reached an agreement that the two parties can have a great mutual understanding for the political development of Uganda as a country.

Sources privy to the MoU say Mao and a yet to be named DP official were promised ministerial appointments by Gen. Museveni in the looming cabinet reshuffe.

Now DP supporters are pressuring Mao to tender in his resignation in the interest of upholding the legacy of the founding party president Benedicto Kiwanuka.

“He has ashamed us. We did not expect him to sell off our party for money. We want to reiterate that whatever MoU he reached with Museveni was in his individual capacity and not a party transaction,” said the Luweero DP youth leader. “Let him tender in his resignation and peacefully join NRM,” he added.

Buikwe South MP Phillip Bayiga Lulume says they were not consulted prior to the agreement.

“We were in plenary yesterday only to see the embarrassing news that our party president has reached an MoU with NRM. We distance ourselves from the development and urge our DP supporters to remain on the core values of the party,” he guided.

SEE ALSO: Mao given 2 weeks to resign as DP president

Gerald Siranda says the motive of the MoU is to paint a new face in the political landscape of Uganda. “We have been using defiant strategies but everything has failed to work. There’s not a thing we’ve not done. We think now is the time to work with the government,” said the EALA MP hopeful.

IPOD chief Frank Russa has welcomed the agreement saying it is a clear sign that ‘Uganda is working towards unity’ and that it is ‘healthy for parties to have mutual agreements outside IPOD arrangements.’

It should be noted that Mao did not summon the DP National Executive Committee members before arriving at that resolution of having an MoU with NRM.