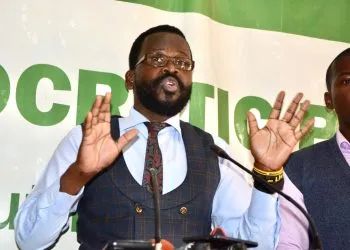 The Democratic Party Spokesperson Okoler Opio Lo Amanu, says in their cooperation agreement, they agreed that DP should be in power in the next five years after a transition from the NRM leadership.

In a Sunday statement during a televised political talk show, the Mao leaning ally revealed that if Museveni does not hand over power to DP after 5 years, then they will be implored to run a unity government.

“If this (hand over from NRM to DP) fails, DP should share power with the ruling government. President Museveni took the first step of agreeing and then decided to share power with DP,” says Okoler Opio.

Meanwhile, the Democratic Party President Norbert Mao has disregarded an attempted ouster championed by Masaka MP Richard Ssebamala who announced himself this morning as the acting president.

“Effective today, I declare myself the acting president general of the Democratic Party till the delegates conference meets to elect another one,” revealed Ssebamala this morning.

In reaction to the ouster, Mao says he is the legal DP president stating that working a Justice and Constitutional Affairs Minister does not in any way compromise his affection for DP.

Mao also lashed out at a section of NRM members, who claim he has done nothing for the party. He said he has sacrificed a lot, including staking his life citing the negotiations with LRA leader Joseph Kony in Garamba forests