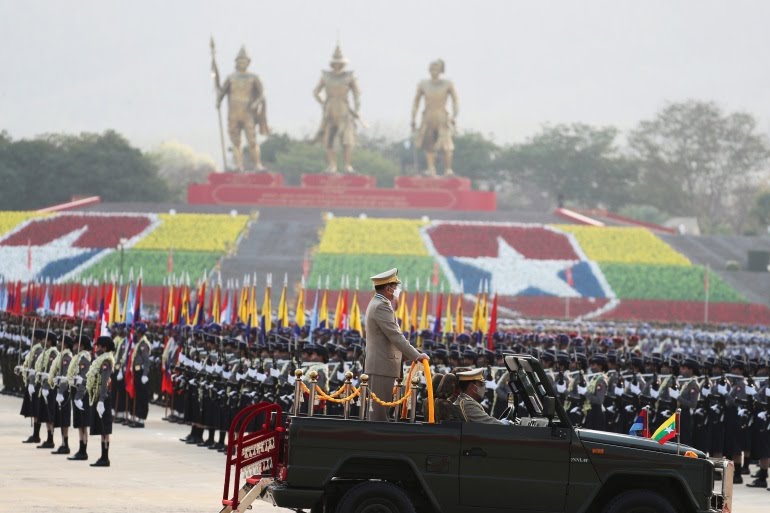 Reported executions mark first use of capital punishment in the Southeast Asian country since the 1980s.
Myanmar’s military government has executed four democracy activists, according to state media.

The four men were executed over their involvement in organising “brutal and inhumane terror acts”, the state-run Global New Light of Myanmar newspaper reported on Monday.

The men were sentenced to death in a closed-door trial in January after being accused of helping militias to fight the military, which seized power in a February 2021 coup led by Senior General Min Aung Hlaing.

Thaw, a hip-hop artist who was previously detained over his lyrics, had been accused of leading attacks on security forces, including a shooting on a commuter train in Yangon in August that left five policemen dead.
The two other men, Hla Myo Aung and Aung Thura Zaw, were handed the death penalty for allegedly killing a woman they accused of being an informant for the military government in Yangon.

The executions mark the first use of capital punishment in the Southeast Asian country in decades.
The last judicial executions took place in the late 1980s, according to the Assistance Association of Political Prisoners (AAPP), an activist group.
Executions in Myanmar have previously been carried out by hanging.

Yadanar Maung, a spokesperson for Justice For Myanmar, said the executions amounted to crimes against humanity and called for further sanctions against the ruling State Administration Council.
“All perpetrators from Min Aung Hlaing down must be held accountable for this brazen act of cruelty,” Maung told Al Jazeera.
“The international community must act now to end the terrorist junta’s total impunity. The international response to these executions and the junta’s other international crimes must involve coordinated targeted sanctions against the junta and its business interests, a ban on jet fuel and a global arms embargo. Sanctions must be imposed on Myanma Oil and Gas Enterprise

“…to stop oil and gas funds bankrolling the junta’s atrocities.”

Thomas Andrews, the UN special rapporteur for human rights in Myanmar, said he was “outraged and devastated” over the executions.
“My heart goes out to their families, friends and loved ones and indeed all the people in Myanmar who are victims of the junta’s escalating atrocities … These depraved acts must be a turning point for the international community.”
A military spokesperson did not answer calls seeking comment.

The men’s death sentences had received condemnation from human rights groups, the United States, France and the United Nations, with UN Secretary-General Antonio Guterres describing the planned executions as “a blatant violation to the right to life.”
The government, which has sentenced dozens of activists to death since the coup, defended the planned executions as lawful and necessary.
“At least 50 innocent civilians, excluding security forces, died because of them,” military spokesperson Zaw Min Tun told a televised news conference last month. “How can you say this is not justice?”
Myanmar has been racked by conflict since last year’s coup, which ousted Suu Kyi from power, with violence spreading across the country after the army crushed mostly peaceful protests in cities.
More than 2,100 people have been killed by the security forces since the coup, according to the AAPP. The government has said that figure is exaggerated.