FDC’s IPOD membership up for debate 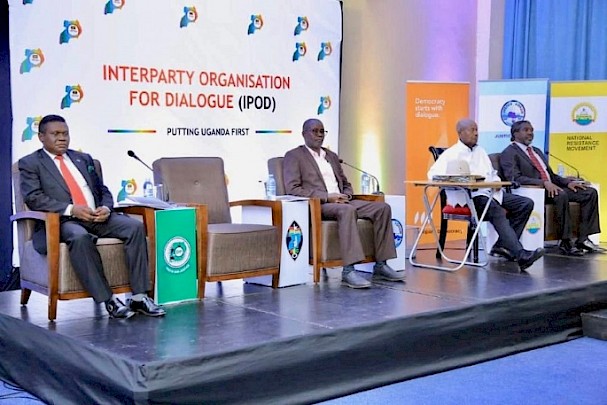 The opposition Forum for Democratic Change (FDC) has threatened to leave the Inter-party Organization for Dialogue (IPOD) because it believes the other political parties are unreliable following the appointment of General Norbert Mao as Minister of Justice and Constitutional Affair.

Speaking at a press conference, the FDC deputy Spokesperson Mr. John Kikonyogo revealed that the party leadership has since summoned the party’s National Executive Committee (NEC), to decide if it is still useful to continue with IPOD or not.

IPOD is a dialogue platform for all political parties represented in the Uganda parliament that was formed by 6 political parties who signed a Memorandum of Understanding to enhance cooperation and collaboration across party lines as commitment was made towards Putting Uganda First.

Mr. Kikonyogo added; “Now how do we cooperate with the parties in IPOD when some of the parties are one and same? DP signed a memorandum of understanding (MoU) that they are going to vote with NRM on most of the issues. So, if we go to IPOD now, can we get fairness, or we have the same people like NRM, DP and UPC voting the same and you want FDC to sit there and watch their things,”

Reports indicate that in the newly signed cooperation agreement between Nobert Mao and Yoweri Kaguta Museveni, the two parties agreed to consolidate and strengthen existing constructive and enduring working relationships in the areas of political dialogue, justice, rule of law and constitutionalism on the basis of mutual respect, reciprocity, common interest and respect for the sovereignty and independence of the parties.

In the same deal, there was a mutual understanding between the two parties that the DP president, Nobert Mao be appointed the Minister of Justice and Constitutional Affairs and another DP leader who is yet to be revealed be appointed to a junior ministerial position.