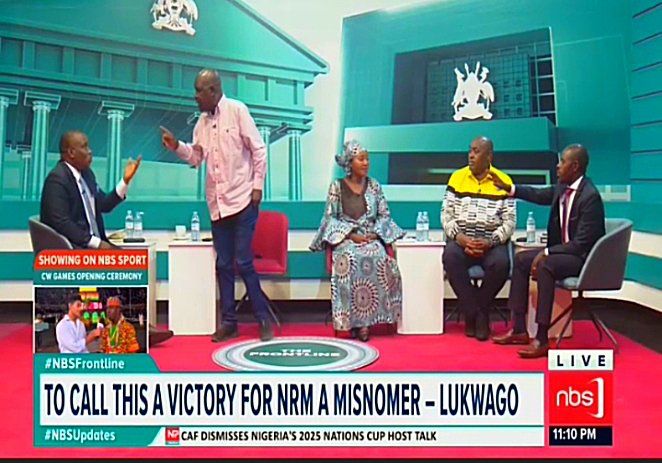 The fight was triggered by a disagreement that arose from a fall out over the Soroti East by-election in which the EC declared the NRM candidate Herbert Ariko Edmund victor. Lukwago challenged the illegalities live on air only to be told to “shut up” by Ofwono Opondo.

“I can even chase you out of here. I will shoot you,” Ofwono Opondo said.

The scuffle escalated prompting the show host and producer to cut it off. The program was eventually return after over 20 minutes of advertising.

On its return, door bangs were heard in the background after Lukwago was excluded from returning to studio. The show producer called it off and pledged to issue a statement explaining the pandemonium.

Apparently, reports say there is a heavy deployment around the NBS premises in what appears to be a plot to arrest the Lord Mayor.

He is still holed up at the NBS media house offices, while Opondo continues to threaten further attack on him!

It’s sad that the media house can’t secure their guests. They’ll be held responsible for all the trauma and damage suffered by the Lord Mayor of our Capital City.

This story is still under development..