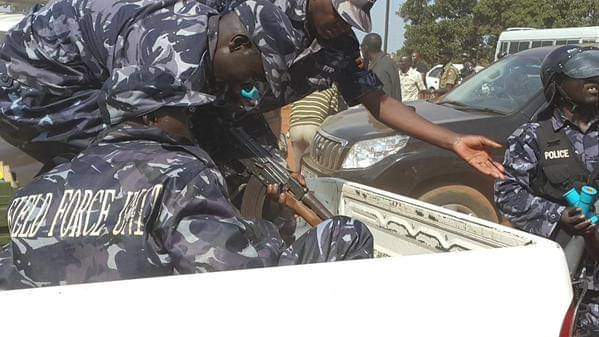 Police and sister security agencies in Jinja have championed an operation targeting suspected protesters who are believed to have participated in the July 25th protests, that caused a mayhem in the city. The operation which kicked off yesterday saw police break into homes of residents in low income suburbs of Jinja city. The search mainly targeted the youth, as police believes they masterminded the Monday violence that saw roads barricaded and passengers whipped.

According to the Jinja police publicist James Mubi, those arrested will be screened and possible suspects will be interrogated to pin their funders.

“We have screened them already. From the 250 we captured, we have retained 50 and released the rest. We are going to interrogate these 50 suspects so they can tell us who is behing them. We are alive to the fact that they are being financed by politicians,” he said.

Locals in Kazimingi and Kikaramoja low income suburbs of Jinja city say the operation was biased and unrealistic. The women say police was randomly breaking into their homes and arresting their husbands.

“My husband sells ice cream for a living. These people have taken him even when they can see his ice cream motorcycle is parked home,” Nabirye Phiona, a local in Jinja emotionally broke down. “What am I going to do for the children? We have nothing to eat,” she added.

“I had sent my son to go and buy food to use at home. He’s been arrested on the way,” another middle aged woman cried out. “They targeted him simply because he has long hair. To them anyone with long hair (dreads) is a criminal,” she added.

Police say all those detained will be arraigned in court and charged with incitement to violence and malicious damage of property, after investigations established that several motorists lost their windscreens stoned by protesters.

The Jinja road is a major sea route that delivers a great deal of Uganda’s imports and exports to and from Kenya.