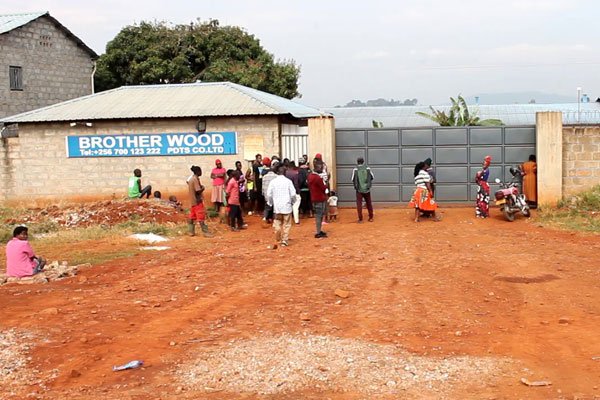 Police and the army have shut down the Brother Wood Factory in Ntenjeru-Kisoga Town Council, Mukono District after an employee was murdered by an electric chainsaw machine, he was using.

Eyewitnesses claim that the victim, who has only been named Brian, went for work on Thursday morning. However, a little time into his daily task of sawing pine wood logs, the equipment he was using jammed, rebounded off the wood, and sliced through his neck. According to Badru Muzeyi, a worker at the factory, he bled to death.

Muzeyi added that Brian was not the first employee to get an accident at the Brother Wood Factory because many others had been injured on duty with others losing legs, hands and eyes but there’s no compensation for them.
“We’re not protected as workers. Our bosses are free to fire us anytime they wish even when one makes a slight mistake; there is no job security at all ,” said Ms Juliana Kalemba, another employee and mother of six complained.

According to Mr. Christopher Kasajja, the OC kisoga police post, Police rushed to the factory to calm down workers who had been sparked off to demonstrate over poor working conditions adding that workers demonstrating could worsen an already bad situation at the company premises.