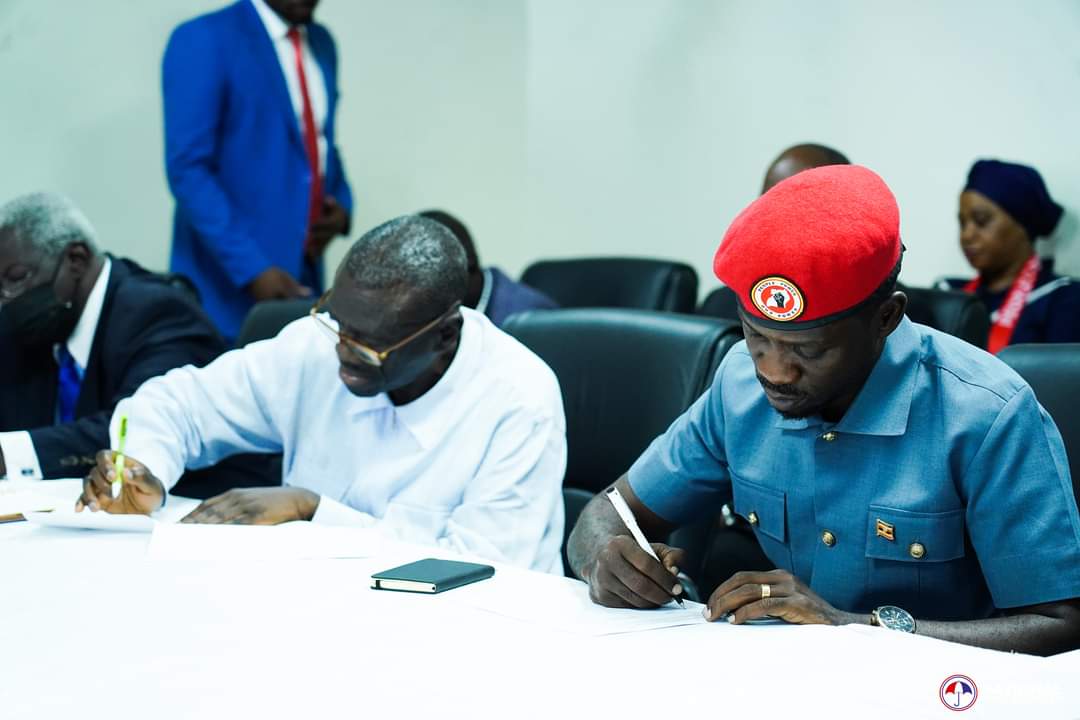 On Monday, the joint opposition parties led by the pillars of the struggle Hon. Kyagulanyi Ssentamu Robert aka Bobi Wine and veteran presidential candidate Rtd. Col. Dr. Kizza Besigye sat at Hotel Africanna and signed an MoU for how to effectively use the elections as a conduit of the struggle for liberation.

Dr. Besigye, Bobi Wine and leaders of other opposition parties save for Democratic Party, UPC and ANT signed on a document detailing their observations on the preceding by-elections from Kayunga, Omoro to Soroti in which they noted that the power of the people ‘has been usurped by the military regime.’

Their unity has drawn mixed reactions amongst the opposition supporters with majority welcoming the idea.

“We have always prayed for unity from the word go. If FDC had worked with NUP in the 2021 general elections, I don’t think Bobi would have been constrained,” remarked one opposition supporter.

Former senior presidential press secretary Joseph Tamale Mirundi however holds a divergent opinion on unity. Speaking on radio 4 on Monday night, Mirundi said opposition does not necessarily have to unite.

“Museveni does not defeat you because you are divided, no. Unity has to come when the right time comes for instance if Museveni fails to raise 50+1% of the total cast vote. That’s when opposition can unite,” he guided.

One of the crew members of ‘Da Mighty Family’ known as Sammy has this morning taken to his social media to castigate ‘his president Bobi Wine’ for derailing from his expectations in the struggle.

According to Sammy, Bobi has done himself a disservice by uniting with ‘career opposition figures who have failed to achieve anything in their 20 year struggle.’

“You have disappointed me my president. Those old guard politicians are perennial failures,” Sammy opines. “You had to unite with that common Ugandan who lost a loved one in the struggle. Not those politicians who survive by ballot. Opposition is their job. If you have failed the struggle please retire back to music,” Sammy said in a 12 minute video clip available on ‘Da Mighty Family’ Facebook page.