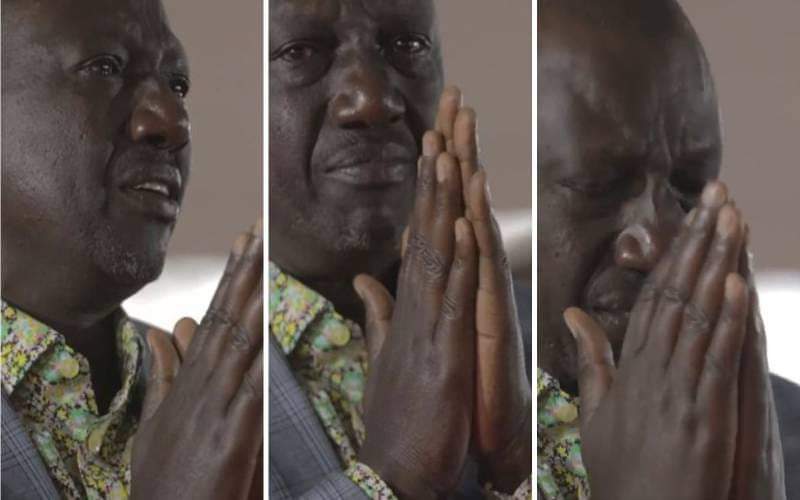 Deputy President William Ruto was on Tuesday overcome by emotions, shedding tears during a church service held at his official residence in Karen, Nairobi.

In the video capturing the moment, Ruto is seen trying to hold back tears during the praise and worship session led by Bishop Mark Kariuki to pray for peaceful elections as Kenyans head to the ballot next week.

The video elicited mixed reactions with a majority online users who responded to the clip, mocking the deputy president.

“Hata alie damu, he will not win on August 9,” Salim Aduol tweeted.

“Anajua in the next few days anatoka hapo, that is why he is too emotional,” Sewe450 added.

“There will be no sympathy votes this time, we are used to his theatrical campaign stunts,” Ben Opondo added.

“The pain of losing an election even after campaigning for 4 straight years,too painful,” said Vic Munyithya.

“Indeed if not for God’s favour Ruto wouldn’t have reached this far. To God be the Glory!” Sabie Barasa said.

“The pain of losing an election even after campaigning for 4 straight years, too painful,” tweeted Vick Munyithya.

The prater session was also attended by the DP’s wife Rachel Ruto,a host of leaders allied to the Kenya Kwanza Alliance and members of public.

After the church service Ruto embarked on campaign rally in Nyeri County to drum up support for his presidential bid six days to the General Election.

This is not the first time DP Ruto is shedding tears in public. In March 13, Ruto broke into tears during a church after a presidential election victory when they vied for the presidency with President Uhuru Kenyatta.

According to a new poll by Ipsos, DP Ruto, is the second most preferred presidential candidate with a marginal lead.

Roots Party candidate Prof. George Wajackoyah came in third with 2.9 percent while Agano Party’s David Mwaure scored 0.2 percent. Another 8.8 percent of respondents said they were undecided on their preferred candidate although they were sure they would vote.